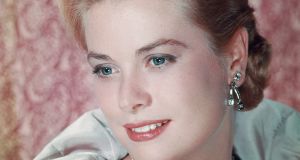 Yumi Katsura: ‘When I met Grace Kelly (above), I understood the real meaning of “elegant” as a verb.’ Photograph: Getty Images

Among the latest linguistic outrages brought to us by advertising, I see, is the use of “elegant” as a verb.  At least according to Private Eye magazine’s Pseuds Corner column, this week’s instalment of which includes a slogan for Mercedes cars: “When your balance is great, strengthen your intuition. When your build is strong, elegant your presence.”

Resisting an urge to throw up while reading that, I went online to check if such usage was already widespread.  It’s not, yet. But it’s not entirely new either.  It has also featured, for example, in World Bride Magazine (the Spring 2015 issue, which I must have missed), during an interview with designer Yumi Katsura, the “Queen of Bridal”, to mark her 50th anniversary in the business.

Not only was she even more explicit in using “elegant” this way, she also backdated it to the 1960s when her work as fashion correspondent involved interviewing the likes of Audrey Hepburn and Grace Kelly.   Of the latter, she said: “When I met Grace Kelly, I understood the real meaning of ‘elegant’ as a verb.”

I’m fairly sure elegant was not a verb in the 1960s.  And even today, although many adjectives have made that transition in the years since, no dictionary I know of recognises elegant as being among them.  Nor does it naturally lend itself to “verbing”.

Elegant is one of those rare words that somehow suit the meaning. It comes from French, naturally, where of course the T is silent.  And part of its charm may be that it seems to combine two smaller French words, the ones meaning “she” and “glove”, respectively.

Gloves can themselves be things of great elegance. In centuries past, they were the subject of much etiquette, with rules about when and where they should be worn, taken off, or used for slapping.  Formal dancing added a frisson to the issue.  Hence one of Leonard Cohen’s sexiest lyrics: “Touch me with your naked hand, touch me with your glove. And dance me to the end of love.”

But – excuse me while I recompose myself – maybe I’m reading too much into it.  Suffice to say that in its gracefully singular sense, elegant has long been an adornment to English.  You wouldn’t want to see it forced to double-job at this stage of its life. Especially not in car sales.

The technical term for using one part of speech as another, by the way, is antimeria. Yes, it sounds like a female relative of a certain age, the one who bosses everyone around.  But it’s from the Greek words for “against” and “part”.  And the practice has probably been around as long as the Greeks, although it’s more popular than ever now, thanks to marketing.

Recent examples that caused some of us to break out in a rash include the AIB’s “we’re backing brave” and the suggestion that “Smart flies Aer Lingus”.  For its cautionary tale, however, Fowler’s Dictionary goes back to 1994, and a British post office letter advising customers that something should be “attentioned”. Fowler noted mildly that “attention” was not yet listed as a verb anywhere, but it also ruled that such redeployment of words happened often and that many found acceptance eventually, even if first provoking “cries of anguish”.

Sure enough, “attentioned” upset a correspondent of The Oldie magazine, who lamented: “The collapse of the tongue that Milton spoke into various mutant babbles is proceeding apace.” But that was a cautionary tale too, because whatever about Milton, Shakespeare had turned nouns into verbs. He has King Lear saying, for example: “thunder would not peace at my being”. Four centuries later, peace is still not recognised as a verb by dictionaries, so there’s little hope for Ernest Hemingway who once used “dictionary” itself in this way. Worse, he had a character speak of “dictionary-ing carefully”.  Ouch.

Getting back to marketeers, the wonder is that a certain adjective much beloved of them and starting with P has not been turned into a verb yet. I’ve complained before about its ubiquity in the corporate world: it’s no longer enough to be committed to providing quality food, hospitality, drain-cleaning, etc; you have to be “passionate” about it.

In the process, the P-word – once reserved for love affairs and certain murder cases – has been robbed of all intensity.  So why don’t marketers use it as a verb too, while they’re at it? I’ll leave that suggestion with them. In the meantime, I urge job applicants everywhere, if they haven’t done so already, to passionate their CVs now.

1 ‘When I look at the viral loads we find in elderly people, it is mind boggling’
2 Chief medical officer urges people not to visit hardware stores
3 Coronavirus: Ryanair suspends refunds and offers passengers vouchers instead
4 Impact of coronavirus ‘overwhelming’ in Republic but for public-health controls
5 Republic’s Coronavirus death toll rises by 28 as confirmed cases up by 500
Real news has value SUBSCRIBE