The Irish Times view on Europe’s centre-right: the perils of imitation 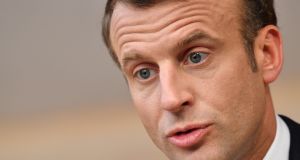 In almost 40 years as leader of the Front National, Jean-Marie Le Pen encountered several centre-right leaders who believed the best way to fend off the far-right challenge was to adopt its rhetoric and policies. Le Pen’s stock response was always the same: voters prefer the original to the copy.

That was borne out in the European Parliament elections in recent days, with centre-right parties that opted to steal the far-right’s clothes being punished by voters. The trend was most striking in France itself, where the list backed by the centre-right Les Républicains, who have swerved to the right on issues such as immigration, scored a paltry eight per cent and finished in fourth place. In Britain, a Conservative Party that had killed off the UK Independence Party by adopting its chief policy idea – Brexit – finished fifth on just nine per cent of the vote. Ukip’s successor, the Brexit Party, came first.

In other cases, centre-right parties have managed to mimic the far-right while holding their votes – but often at great reputational cost. On Monday, conservative Austrian chancellor Sebastian Kurz lost a parliamentary confidence vote – one that finished off his government – as the fallout from a scandal involving his ultra-nationalist coalition partner, the Freedom Party, continued to reverberate. Manfred Weber, the centre-right candidate for the European Commission presidency, remained close to the Hungarian autocrat Viktor Orban in the hope of moderating him but the tactic appears to have had no influence on Orban and has hindered Weber’s chances of winning the broad support he will need if he is to succeed Jean-Claude Juncker.

The alternative approach is that of Emmanuel Macron, who built a winning presidential campaign on repudiation of far-right demands, positioning himself as an ardent advocate for European and liberal values. The lesson is clear: embracing far-right parties does not moderate them or blunt their edge – it legitimises them, it moves the centre ground to the right, and it rewards the ultras at the expense of their imitators.

1 Drug dealer loses codes for €53.6m bitcoin accounts
2 Anti-Irish bigotry in Britain has not gone away
3 Would you kill one person to save five? Depends if you’re a millennial or not
4 Ben Affleck: ‘It took me a long time to admit I am an alcoholic’
5 L’Arche founder implicated in sexual abuse of women
Real news has value SUBSCRIBE