Of Berks and Burkeans – Frank McNally on foxhunting, the French Revolution, and Brexit 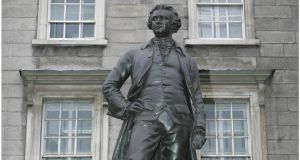 The words “Burkean” and “berk” do not often appear together in print, but when they featured side-by-side in the subheading of an Economist article on Brexit recently, it sent me searching through the dictionaries.

Not for Burkean, which I knew derived from Edmund Burke, the Dubliner now regarded as the founder of modern British conservatism.  Nor for the meaning of berk, which I knew to be “idiot”, more or less. Indeed, the whole point of the Economist piece was to lament the decline of the Tory Burkeans in Brexit Britain at the hands of the “berks” now in control of government.

But it had somebody escaped me until this that “berk” is Cockney slang, and that it’s one of the more ingenious examples of the genre. Not only is it short for “Berkeley Hunt”, a famous fox-hunting pack from the west of England, its use is somehow acceptable in polite circles. Which is still more than can be said of the term (rhyming with “hunt”) for which it deputises.

Whether any of the implied insult was intended for the word’s unwitting parents – foxhunters – is unclear. That sport has certainly had its share of detractors, from Oscar Wilde, who called its aristocratic English enthusiasts the “unspeakable in full pursuit of the uneatable”, to Brendan Behan, who defined the expression “Anglo-Irish” to mean “a Protestant on a horse”.

But “berk” as a slang term first became popular in the 1930s, it seems.Which is when Rebecca West was writing Black Lamb and Grey Falcon, the War-and-Peace-sized epic about Yugoslavia between the wars that l brought with me on a Balkan holiday last month.

And by coincidence, one of the many lines I underlined in it, or noted with an “!” in the margins, was an insult West levelled in passing somewhere about the horsey set. She was herself of Anglo-Irish stock, a generation or two back, in Kerry, so that one of the many joys of her epic is that she peppers the sometimes-too-detailed accounts of episodes from Yugoslav history with parallels from nearer home.

Summing up a Croatian nationalist leader assassinated in the 1920s, for example, she invites readers to “imagine an Irish politician with Parnell’s personal magnetism, who was at one and the same time an agrarian reformer, a Stewart legitimist, a republican, a Communist sympathizer (sic), an advocate of the Aryan race theory, and a close friend of the King of England . . . ”

But her attack on the horsey set occurs elsewhere when, lamenting Serb misgovernment in Montenegro, she explains it thus: “The district of Petch was handed over to an old man who had been King Peter’s Master of the Horse, and he appears, like our own followers of Belvoir and the Quorn [two other well-known British foxhunts], to have offered conclusive proof of the powerfully degenerative effect of equine society on the intellect.” Ouch.

Not that, mention of “berks” apart, fox-hunting featured in the Economist’s diatribe against Brexit: a subject which in any case has divided not only brother against brother in the Conservative Party but presumably hunter against hunter too.

Indeed, the latest skirmishes in the conflict saw Nicholas Soames, a leading opponent of the 2002 ban on fox-hunting, sink his teeth into the nether regions of Jacob Rees-Mogg, a fellow Etonian and hunt supporter, denouncing him as “an absolute fraud […] a living example of what a moderately cut double-breasted suit and a decent tie can do with an ultra-posh voice and a bit of ginger stuck up his arse”.

The Economist instead found a Brexit metaphor in the French Revolution, to explain how the party of Burke – who favoured gradual change, respectful of tradition, with parliament tempering the passions of the people – had become the party of Rousseau – a democratic dictatorship imposing the majority view with ruthlessly disregard for the rest.

Events of 1789 had a defining influence on Burke himself, of course. Before that, he had been more radical and in general sympathy with the Tories’ opposition, the liberal Whigs (whose nickname had equestrian undertones, deriving from a band of Scottish horse thieves).

Then famous polemic Reflections on the Revolution in France (1790) foresaw the descent into violence that would follow, but it also cost him friends.

Most notably it marked a bitter break between him and his chief disciple, a leading Whig and British statesman who, by contrast, became further radicalised by events in France and was henceforth refused admittance to Burke’s home, even when the Irishman was dying.

Burke might have thought his former friend a berk, had the term existed then. But the man’s name, perhaps ironically, was Charles James Fox.

1 Fianna Fáil may have just pressed the pause button on the property market
2 Eating out in Dublin – the homeless way
3 Irish Times poll: Large majority want change of government
4 Which jobs do teenage girls and boys aspire to have by age 30?
5 ‘In Ireland I’ve found another form of persecution’
Real news has value SUBSCRIBE