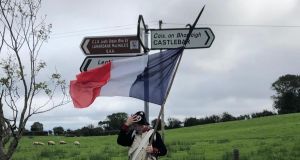 The Mayo village of Lahardane is not the most auspicious place to start a journey. It is now and forever associated with a group of young emigrants who in 1912 left from here to board the Titanic.  Eleven died in the disaster, and Lahardane now commemorates them with a sculpture garden, among other tributes.

But the village was also on the route of one the most famous military marches in Irish history, when General Humbert led a small Franco-Irish army south through it from Killala in 1798 to the event that became known as the “Races of Castlebar”.

And having missed the first two days of a ceremonial re-enactment last weekend, I strapped myself into period military costume just in time to join the last leg of the journey, from Lahardane, on Sunday morning.

The original trek was overnight, on a trail through bog and mountain, deliberately chosen to wrongfoot English troops in Castlebar, which were defending the main road.

So apart from us having had a night’s sleep, and breakfast, our “In Humbert’s Footsteps” march was to be just that: skirting a clouded-over Nephin Mountain and braving the “Windy Gap” before descending on Mayo’s county town, 23 km away, via the original route.

The weather added authenticity. It was foul on the night in question 221 years ago. And although we left Lahardane in pleasant conditions, by the time we reached the Gap, rain had arrived from nowhere – sideways – and insisted on accompanying us for the rest of the trip.

It was soft rain. In other circumstances it might have seemed poetic. But when you’re wearing heavy woollen coats and waistcoats and already weighed down by swords, guns, ammunition boxes, and other accoutrements, rain does rather add to the hardship.

Even when dry on the outside, by the way, 1790s military uniform offers certain internal challenges. The combination of tight knee breeches, strapped-on thigh-high spats, and several belts can be a bit like the stuff they sell in certain adult shops.

But the effects of bondage aside, I had been warned by experts that chafing can be a big problem too. Thus, the most crucial part of my ensemble – although please don’t tell anyone this – was a pair of leggings borrowed from the wife of our troop commander.  They were life savers.

As for the rain, our logistics department (whose name was Sharon) turned out to have several plastic raincoats in her bag, along with a range of pain-relief products that would have done honour to a pharmacy. So at the price of some historic credibility, we avoided the uniforms getting wet from the outside in, albeit while increasing the rate at which they were getting wet from the inside out.

Nobody fired cannon balls at us, unlike the original marchers, who suffered heavy early casualties before routing the defenders

An army marches in its own sweat, as Napoleon didn’t say.  And another noteworthy fact about period uniforms – which cost €1,000 upwards, although mine was borrowed – is that you can’t really launder them. They shrink and run too easily, so you can only air them between use. Aired or not, they must mature like fine wines, with bouquets to match. Even if mine dries out eventually, I pity the next person who has to wear it.

Anyway, after five hours of sweaty tramping on Sunday, we made it into Castlebar in one piece, although by then the soles of my feet felt like they’d been beaten by pikestaffs and I have since developed aches in muscles I didn’t know I had.

On the plus side, nobody fired cannon balls at us, unlike the original marchers, who suffered heavy early casualties before routing the defenders and inspiring a rapid retreat that inspired the “races” gibe. In our case, by contrast, we had to make do with overrunning a food fair, where we ceremonially slaughtered several innocent pints of beer.

I say “pints”, but in McHale’s Bar later, I was introduced to a curious Castlebar phenomenon called the “Medium”, a time-honoured practice whereby you can order a pint-glass of stout, not quite full.

At first, I assumed this was to leave room for something else to be poured in. But no. The 7/8th measure is a thing in itself: a vestige of poorer times when it allowed a man to seem to have a full pint before him (half-pints being only for ladies then), while saving crucial pennies.

Intentionally or otherwise, it’s also a good drink with which to toast General Humbert, who, had he won a few more battles, might have converted Ireland to the metric system a lot sooner. A British imperial pint glass holds 568ml. Filled to 7/8th, like the Castlebar “Medium”, it’s a demi-litre.