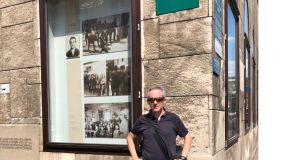 It has been rightly suggested that, on the model the old BC/AD divide, modern history could be separated as BS/AS: before and after Sarajevo. This being so, it seems apt that the pivotal event in that city happened at a street corner, where on June 28th, 1914, the Archduke Franz Ferdinand’s driver took a cataclysmic wrong turn.

Not that it was wrong, by his orders. It had been part of the original itinerary for the car to veer right, off Appel Quay, into the narrow streets of the old city.

But that had been before the first assassination attempt on the archduke, an hour earlier, when one of at least six would-be killers threw a bomb that was deflected under another car in the cavalcade.

In the meantime, a shaken Franz Ferdinand had been to city hall to deliver a speech, while handlers debated his next move.

They decided he should retrace the earlier path, back up the quays en route to the hospital where an aide-de-camp injured in the explosion had been taken.

Alas, nobody told the driver, who turned right at the Latin Bridge as first planned.

Realising the mistake, he then stalled the car long enough for Gavrilo Princip (19), who had missed his chance earlier but was now in just the right place, to strike.

A poor marksman, Princip would have struggled with a moving target. And as it happened, in aiming for the archduke, he also killed the archduchess, something for which he expressed regret during the four years he spent dying in jail. But in hitting his main target, he changed the world forever.

In her epic book on Yugoslavia in the 1930s, Black Lamb and Grey Falcon, Rebecca West interviews a man who had been in the city hall that morning, 20 years before. He recalled the archduke arriving “red and choking with rage” about the earlier attack, then struggling to locate his speech and, when he did, being further enraged to see it “spattered with the aide-de-camp’s blood”.

The witness had been struck by the strange way Franz Ferdinand walked, “lifting his legs high as if he were doing the goosestep”. This, he presumed, was his way of showing he wasn’t afraid. But he had every reason for fear.

Remembering the silence from onlookers, the witness recalled: “We all felt awkward because we knew that when he went out he would certainly be killed.”

West, by contrast, doubts there was anything inevitable about it, despite the mass hostility from Serbs in the city - outraged by a royal visit from the occupiers on St Vitus’s Day, their national commemoration – and despite the number of potential assassins.

The gunmen and bombers had been trained by a Serbian militant group, the Black Hand. But they were young and incompetent. One would-be killer lost his nerve at the last moment and, fleeing, caught a train to Montenegro. It was the archduke’s bad luck that the most serious-minded of the group was the one to whom the best chance fell.

On the other hand, West also argues that Franz Ferdinand had long conspired in his own demise by making so many enemies at home and abroad.  He was an angry man who nursed his resentments, chief among them the official treatment of his wife, who was insufficiently aristocratic for Austrian law and had been denied the trappings of royalty.

It was only in his military capacity he could fully include her in official engagements.  Hence her presence in Sarajevo, where he was inspecting troops, and where his hostility towards those who might have protected them helped seal their doom. Franz Ferdinand’s love of his wife had been a saving virtue, until she died for it.

His less admirable traits had included a mania for shooting animals.

This was common sport then, but Franz Ferdinand took it to extremes, being noted for his talent in organising “battues” – the driving of wildlife towards the shooters. His innovations included a pear-shaped battue, by which a wide sweep of game would be directing into a narrow passage, at the head of which he and his gun would always be located.

Hence West’s powerful metaphor wherein she imagines the archduke followed to Sarajevo by the spectral “half a million beasts” (his own estimate) he had killed. It was now his turn to be at the wrong end of the battue.

By his own actions over many years, Rebecca West wrote, “he had placed at their posts the beaters who should drive him down through a narrowing world to the spot where Princip’s bullet would find him”.