At The Border, Cross – Frank McNally on the stresses of driving through the former Yugoslavia 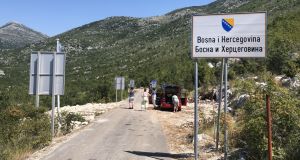 “We forgot all about borders because, God knows, the roads were enough to be worried about”

On a family road trip through the former Yugoslavia recently, we got used to crossing international borders, some less eventfully than others. The mountain pass that took us from Croatia into Bosnia-Herzegovina, for example, was so devoid of traffic as to make me doubt assurances from Google Maps and AA Route Finder that it was a through road at all.

But sure enough, we eventually arrived at a hill-top post where a dour border guard stamped our passports, sending us on our way to Mostar within seconds. Then, days later, we crossed from Bosnia into Montenegro, this time in a mountain valley, over a rickety wooden bridge, after only a short delay.

By contrast, on that occasion, we noted the horrendous tailback in the opposite direction. It snaked along the narrow, winding road for kilometres. But this being a Friday, in August, we guessed it must be a holiday weekend in Montenegro. Then we forgot all about borders because, God knows, the roads were enough to be worried about.

Speaking of God, there is an old Balkan saying that, after He created the world, he had a pile of rocks left over and made Montenegro out of them. That would explain the countless hairpin bends, and tunnels, and gorge-crossing bridges, although like many building projects, this one still looks unfinished, with roads frequently overhung by rock faces held together by wire mesh.

You can see how the Montenegrins successfully defied all Turkish invaders down the centuries, even if their hostile terrain had to be matched by their fearlessness in battle.

But as well as great fighting powers, the natives also seem to be blessed with a miraculous ability to see through mountains. Hence the confidence with which they overtake on blind bends.

Add in the high numbers of free-range cows on Montenegrin roads, grazing the “long acre”, and it can be dangerous for visitors to blink.

We survived all that, however, to enjoy a relaxing last weekend of the holiday in the seaside city of Budva, from where it was a mere 70km back up the coast to Dubrovnik Airport and the flight home.

This being so, I thought the AA was a bit conservative in allowing two hours for the trip. But no doubt there would be more hairpins involved. There would also be a short ferry crossing. And there was one more border post.

Erring on the side of caution, therefore, we allowed another hour on top of the estimate and set off blithely.

The hairpins were no problem. Nor was the ferry.  Soon we were only an estimated 20 minutes from the airport, with more than 2½ hours to flight time.

Then we hit the tailback for entering Croatia.

We couldn’t tell how long this was, because there was a bend ahead. We could only tell that the queue was moving at the speed of spilled treacle, and that no matter how slowly it moved, there was nothing we could do. This was a narrow, two-lane road, with cars bumper-to-bumper. Not even a Montenegrin would have tried overtaking.

After half an hour of stomach-gnawing tension, the prospect of having to buy five new flights home, in peak season, became painfully real.  After an hour, I stopped checking the time anymore, because that didn’t help. My breathing grew strained. My teenage sons stopped fighting in the back seat. Grim silence descended on the car.

When we were at last within metres of the checkpoint, with every minute crucial, three motorbikes with pillion passengers breezed past, skipping the 90-minute queue and going straight to the top.  As a smiling passenger got off and posed for selfies, I noticed she had the letters “IRL” on her jacket.

But at that moment, I hated her and her companions like a Montenegrin freedom fighter hated the Ottomans.

On the remainder of the drive, in a cold sweat although it was 34 degrees outside, I issued orders to my passengers to jump any airport queues, with apologies, and “if you can get on the plane, don’t worry about me”. Meanwhile, I was planning a high-speed car return.

Unfortunately, knowing about Montenegro, the rental company insisted on a full examination of the vehicle, rubbing dust off here and there in search of scratches. In another miracle, there were none.

Then I sprinted to airport departures to find that our flight had been delayed. We all made it on board with ease. And three hours later, breathing freely again, I was relieved to be back in Ireland, where international borders are a thing of the past.