Tunnel vision – Frank McNally on the highs and lows of Sarajevo 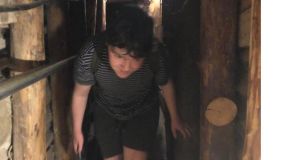 Since as long ago as the 1984 Winter Olympics, I have known that Sarajevo is a city surrounded by hills. But even so, when I finally met some of those hills in person last month, on a family holiday, it was a daunting experience.

My rental Skoda estate was no match for the gradient leading up to the suburban location of our Airbnb. It had to be coaxed along in first gear at several points, with the encouragement of occasional expletives.

When we finally reached the summit, as I thought, enquiries from a man herding goats in his garden established that we were at the wrong end of a long, winding, semi-rural road. So it was several more steep humps and hollows later before we found the place, whose gateway happened to on both a sharp incline and a corner, which I slightly overshot.

Modern Bosnia is a confederation of two political entities

Attempts to reverse the necessary metre-and-a-half failed amid a smell of burning rubber. Whereupon the lady of the house suggested I continue downhill, go around the block, and try again. This I was relieved to do. But as I turned into the gateway a second time – mortified – I realised I’d overshot again.

My four passengers, all highly amused, had to bail out to reduce weight, after which, and with more burning rubber, I completed an inglorious entry.

Later that night, happy to abandon the traumatised Skoda, we descended on foot towards the city centre, to buy food and stop at a bar. The bar was in Grbavica, a name that rang a grim bell from the 1990s, and more recently from my reading of Steven Galloway’s novel, The Cellist of Sarajevo.

Grbavica is located down on the flat, but it was shelled even flatter during the siege years, when the city was surrounded by Serb guns. “Grbavica is entirely controlled by the men of the hills,” a character in Galloway’s book notes: “even to go near it would be suicide.”

The strategic significance of the hills was underlined by a car-trip we took a couple of days later, when leaving Sarajevo for Montenegro. This first involved another short climb, towards the top of the ridge behind our house, where signs suddenly welcomed us to the “Republic of Srpska”.

If the Serbs had the physical high ground, most of the time, the city’s defenders had the moral one

For a moment, I wondered had we left Bosnia already.  Then I remembered that, no, modern Bosnia is a confederation of two political entities.  Our hill-top road was the front line of the war, or near enough. So after a short trip through Serb territory, we had to re-enter the Bosniak city bounds for our immediate destination: the airport tunnel.

During four years of siege, the hill-holding Serbs had Sarajevo in an almost complete noose, except for the airport, which was under UN control.

But in early 1993, Bosnian soldiers and other volunteers started digging an 800-metre tunnel under the airport that would link the strangled city with the rest of Bosnia, just beyond the noose, thereby circumventing the international arms embargo and opening a channel for troops and supplies.

It had to be dug by hand, by men working in shifts, day and night, for the daily wage of a packet of cigarettes: hard currency in the black market. And once opened, it became crucial to the city’s survival, with a miniature railway and electric light gradually added to the facilities.

Even then, it was a struggle to keep the tunnel free of flooding. So after the war, it became quickly impassable, which most of it remains.  There was little official interest in preservation. But as peace descended again on Sarajevo, some of those who had been centrally involved in the digging decided that it too important a piece of history to be buried.

Since then, the Kolar family, whose house hid the city end of the tunnel, have turned their home and garden into a fascinating museum, showing documentary films and photographs of the period, with many other artefacts. The prize exhibit is a 25-metre section of reclaimed tunnel, through which visitors can walk, crouched. Across the garden fence, meanwhile, planes still roar up and down the runway; many of them now carrying war tourists.

As with most conflicts, the one in Sarajevo wasn’t always good guys against bad. Even among the besieged, as usual, some entrepreneurs thrived on the general misery. Murky questions also arose over the authorship of certain atrocities.

But if the Serbs had the physical high ground, most of the time, the city’s defenders had the moral one.

And for all the deprivations inflicted by the “men of the hills”, deservingly in the end, it was the people of the tunnel who prevailed.

1 52 places to go in 2020: Here’s where the New York Times says you should visit
2 Who are Ireland’s 17 billionaires?
3 Rob Delaney: ‘As my career took off, my son got sick...then he died’
4 Taoiseach claims Sinn Féin not ‘a normal political party’
5 Girl settles case over head getting trapped in electric gates for €20,000
Real news has value SUBSCRIBE