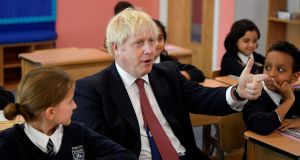 From parliament there is a mandated Brexit extension without the escape hatch of an election; from the European Union there is a backstop that reduces the chances of a deal passing parliament. Faced with squaring these circles, the British prime minister doubled down by amputating his own majority in parliament with the expulsion of 21 MPs. Not for nothing did Taoiseach Leo Varadkar allude on Monday to the Herculean tasks ahead for someone indulging in apparent acts of madness.

Let us consider that these acts were not the last desperate breaths from a weakened man, but a calculated process to create a stockpile of weapons for decisive battles ahead. We know that the next election will be pitched as “The People versus Parliament” and for Johnson to come out on top he must be the absolute defender of the former against the latter.

The events of the last 10 days will cement his warrior reputation ahead of the finale of this epic struggle. First, Speaker John Bercow took constitutionally unprecedented steps to allow a parliamentary procedure, standing order number 24, to bind the government’s hands. It did so with the votes of MPs from Johnson’s own party. Despite the loss of his majority, the opposition did not call a vote of no confidence. Neither did they allow for a general election to take place – twice. When the time comes, Johnson can portray this as parliament preventing Brexit, initiated by a biased speaker, aided and abetted by disloyal Conservatives, delivered by an opposition too cowardly to remove him and all without allowing the people to have their say.

Wednesday’s ruling by the Scottish appeal court that the government’s advice to Queen Elizabeth on prorogation was unlawful only further embeds Johnson’s narrative that the establishment is trying to frustrate Brexit. Judges will join MPs as enemies of the people – exactly the headline that ran after the Gina Miller court case allowing parliament a vote on article 50 in November 2016.

There is one more institution that the Johnson must force into the rogues’ gallery ahead of an election: he must return to where it all began – the European Union. This is where the most difficult of circles to be squared can be deployed as ordnance: he will weaponise the backstop.

His first letter to the EU in August read like an ode to the union. The Common Travel Area takes a starring role, appearing twice on the first page, as a reminder that it enabled freedom of movement of people between the United Kingdom and Ireland long before the EU existed. He also reiterates that the UK “will not put in place infrastructure, checks, or controls at the Border”. That means no hard border, even in the event of no deal.

The decision will be forced upon Ireland, and in the process, set up the European Union as the ultimate bogeyman

This letter is a signal to the EU that the UK is happy with its decades-long bilateral relationship with its neighbour. Johnson is unafraid of the circle that must be squared when that time comes – because he is not going to be the one squaring it. The decision will be forced upon Ireland, and in the process, set up the European Union as the ultimate bogeyman, subjugating the UK’s friends in Ireland.

The EU and Varadkar will push back against this and attempt to pass back squaring the circle to Johnson. Eventually, something has to give. Right now, that’s been Johnson. But by taking the blows at this stage of the fight he can set up a sucker punch for the final round. He will be on the side of the 52 per cent who voted Leave more than three years ago. Against him will be the assembled faces of the establishment, who would seek to thwart the will of the people. Stacked up as Hades to Cerberus, these communal foes will power his Herculean battle.

If he has to resign or force a court case to avoid an extension, these extreme measures are the grist to his argument. By boxing him in, opposition forces arm him with what he will describe as their perfidy, bullying and cowardice.

The necessary squaring of circles is therefore exactly what Johnson needs as this long battle enters its final rounds. He is setting up a contest where only an extreme solution can break the deadlock. This will only work if the electorate is still as divided as it was at the time of the referendum. All the signs are that public opinion is polarising. In the people versus the establishment, the British prime minister will leave no one in any doubt about who the enemy is. And in doing so it will be perfectly clear which side he is on; only then can he hope to win a majority in the next election.