Coronavirus: Allow young to restart their lives and the economy

Scale of youth unemployment is not sustainable and, indeed, frightens me 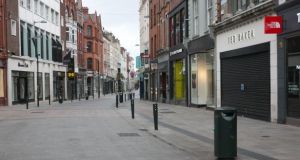 It is time to release the young. They face little risk from coronavirus and are suffering terribly financially. Plus they will rebel anyway if ignored by those who for decades have made capital gains on houses and built up pensions.

In Ireland, as in the United Kingdom, the economy is crashing in a way I have never seen in half a century of studying economics. The Irish Central Statistical Office just announced a Covid-19 adjusted unemployment figure of 28 per cent. For those under 25 years old, it is double that. This path is not sustainable. Indeed, it frightens me.

The young are far, far safer than older people. That is because for biological reasons young humans have a much stronger immune response to almost all viral attacks on the body, including to a Covid-19 attack. Yet we have forced our youth inside as though they were at serious risk like the old – when they are not. In the UK, the fatality rate among those in their early 20s, for example, is only two in every 10,000. Among those aged in their 60s it is more than 80 times that.

How could an exit strategy be organised? We should sequentially release the young, and then the not-so-young, and then the old. Governments could use this “rolling age-release” strategy in which age cohorts are released sequentially. Social distancing could be maintained as an added protection. The young would have also be told that to minimise others’ risk they would need to keep largely away from the old.

Any lockdown release policy that does not design itself around the extreme “age gradient” in human coronavirus risk is likely to have unpleasant consequences for citizens.

The key advantages of a rolling age-release strategy, which would begin with the youngest adult age groups and then work gradually up the age range, are that:

– It recognises that we cannot wait indefinitely to reopen the economy;

– It is fair, because it targets and helps the group currently the hardest-hit financially;

– It is the safest way to have an exit strategy until a vaccine is available;

– Crucially, it is the least likely strategy to require that people will later have to be painfully recalled into further rounds of lockdown (because in principle the young should be able to stay out once released);

– It usefully plays for time as researchers work on a vaccine;

– It offers a leadership role to the young in a moment of crisis, and would give a generalised sense of hope to the remaining adult population;

– The young are going to be stuck with an extraordinary level of national debt for decades to come;

– The young are going to be the most troublesome, and the hardest to keep inside anyway.

Even if politicians do not want to follow the idea of a sequential release of younger-to-older cohorts, they ought to explain to the public the risks associated with being older. Death risk could be made clear in Government briefings and on television. The information would help citizens make their own choices about what to do and what not to do.

Nearly everyone can be trusted to behave sensibly if they get the facts about their own risk. It is imperative that we get the economy working again.

This principle of sending out the younger citizens has another advantage. It allows us to learn how the virus spread will behave when society starts to look slightly more like it did. Moreover, older workers in the economy, who are not yet released, might share in the interim in the added prosperity. They could act – electronically through sources such as Skype, Zoom and FaceTime – as supervisors and mentors. Plus their time for release will come.

How would an age-based release rule be enforced? Presumably gardaí would have to be given the right to reprimand, and, if really necessary, ultimately fine those caught breaking the age rule. That is not at all ideal, but we long since as a society gave up what might be ideal.

A release of younger people might well, of course, cause resentment among those older than the age group released. That will be especially difficult for the 30 per cent of older people who are convinced they are in the top 10 per cent of the healthy old.

Nevertheless, to reassure them, the older groups could be told when their turn would eventually arrive, and they could be encouraged to check a Government-sponsored website detailing the exact risk-by-age pattern of the virus. There might be a “Calculate Your Own Risk” app, that would be based on the best available epidemiological evidence. This would give people an estimate of their personal risk (based on their age, gender, BMI, etc).

Nearly everyone can be trusted to behave sensibly if they get the facts about their own risk. It is imperative that we get the economy working again. Let’s allow the young back out to restart the economy and their lives. Otherwise, our nations will soon be at 80 per cent youth unemployment and we may well face civil unrest as well as a virus.