Nursing homes must be made a thing of the past 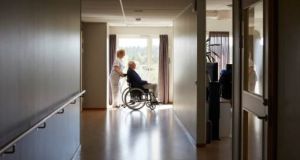 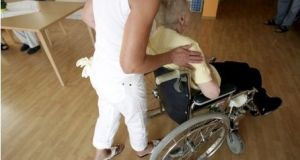 Comparative experience shows that community healthcare costs can be kept within manageable bounds if the underlying health condition does not deteriorate (as it tends to do in congregated settings). File photograph: Getty

On Friday May 8th, Leo Varadkar reflected aloud on the Late Late Show on whether nursing homes are a wise investment for the future. The Taoiseach is one of the first political leaders in the world with the political imagination to think beyond orthodox arrangements.

He made his remarks in response to a question about whether he had any regrets with respect to the Government’s response to Covid-19. Uppermost in his mind must have been the sad reality that a high proportion of deaths in Ireland (and indeed right around the world) have taken place in care homes. Living in these places makes it intrinsically difficult to physically distance oneself. Protecting the service personnel attached to them is also a major challenge. Living with any concentration of people categorised as “vulnerable” to the disease is a disaster waiting to happen.

And so, the Taoiseach rightly reflected on a future where we might have to rethink the wisdom of such settings and the wisdom of public investment in them.

He speculated that we may have to think about elder care along the lines of disability care where it has in fact been official Government policy since 2011 to end congregated settings for persons with disabilities. That is, of course, still a work in progress. But at least the official ambition since 2011 has been to facilitate community living for all people with disabilities – regardless of age or severity of disability. More than this, the UN Convention on the Rights of Persons with Disabilities, which Ireland has ratified, recognises institutionalised facilities as a violation of human rights.

Despite popular misconceptions, there is nothing natural or inevitable about institutionalisation as a policy choice for older people. A number of countries have begun to move decisively in favour of community living options for older people. At its last summit on age policy (2015), the White House recommended that “long-term care” for the elderly should primarily entail reinvestment in the community to enable community living as a realistic option. Israel has a law on the books since 1988 to provide older people with a legislative right to supports to continue living in their own community. And the Australian Royal Commission on aged care quality has recently called for submissions on alternatives to institutions – a sure sign the policy landscape is shifting. Swedish experience shows that community living for older people is not without its own share of problems in implementation. But, overall, these problems are preferable to congregating older people in institutionalised settings with obvious vulnerabilities to pandemics.

Unlike the disability context, the “naturalness” of institutions for older people has yet to be fully deconstructed. One of the main arguments for them has to do with cost and effectiveness. However, given the massive amounts of money invested directly and indirectly (tax breaks, capital grants, subsidies), it is not at all clear that such sites are cost-effective.

Comparative experience shows that community healthcare costs can be kept within manageable bounds if the underlying health condition does not deteriorate (as it tends to do in congregated settings). It may well be that new flanking policy measures are needed to make community living work – like the relaxation of labour laws to enable flexible working hours to be able to care for a parent as well as more substantive family supports. This will undoubtedly mean expanding pension rights for carers which has in fact been demanded by the UN treaty body responsible for gender equality (the Convention on the Elimination of all Forms of Discrimination Against Women).

The Taoiseach’s remarks have significant European resonance. One of the Taoiseach’s colleagues – Mairead McGuinness MEP – was central to efforts in 2013 to change the underlying principles of the EU Structural and Investment Funds (ESIF) to ensure that EU taxpayer money would be spent avoiding institutionalisation and developing community living options. She deserves immense credit for this.

Popularly understood to apply just to people with disabilities, these new ESIF provisions actually apply to all – including older people. True, there have been setbacks. True, some countries are not going as fast as others. True, some abuse of the rules persists and has to be confronted by litigation if necessary. But the intent – using EU taxpayer money positively to create entirely new possibilities for our citizens – is both morally correct and economically efficient.

The European Commission is now relaxing the rules on funding for social infrastructure and ESIF expenditure across Europe to enable member states respond and recover sustainably. The World Bank announced it is prepared to deploy up to $160 billion (€146 billion) over 15 months in Covid-19 response funding. The European Investment Bank has pledged €5.2 billion for a global response outside the EU. There has never been a better opportunity to make sure that the money goes where it is truly needed: developing services and protecting rights by moving people out of residential facilities into safe, supportive communities immediately.

Consistent with the Taoiseach’s sentiments, and anticipating a new government, Ireland could certainly play a more proactive role in ensuring that ESIF funds play their part in developing community living options for all, including older people. Ireland also hopes to gain a seat on the UN Security Council. We would also encourage Ireland to take a leadership role and help set standards by championing the right to community living for older people in the much-anticipated UN treaty on the rights of older persons. A sustainable recovery requires no less.

Gerard Quinn holds the Wallenberg chair of law at the University of Lund and is a research professor at the University of Leeds. Ann Campbell is co-executive director of Validity, an international NGO seeking to advance the autonomy and deinstitutionalisation rights of people with intellectual and psychosocial disabilities

1 Restaurants and gastropubs to reopen in December under Government plan
2 Helen McEntee holds up well for someone with barely a leg to stand on
3 Saoirse Ronan and Daniel Day-Lewis on ‘greatest 21st-century actors’ list
4 Admission of mistake in Oxford vaccine dose raises doubts over reliability
5 Michael J Fox: ‘In the wheelchair, I’m luggage. No one listens to luggage’
Real news has value SUBSCRIBE