My Kingdom for a Verse – Frank McNally on King Richard III, Shakespeare, and Irish bards 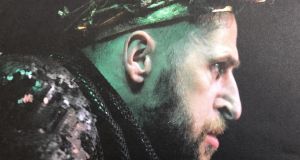 The riveting production of Richard III at the Abbey reminded me of one of the all-time great understatements. It was supposedly the last thing spoken by a certain William Colyngburne, a conspirator against King Richard, who was executed for treason in 1484. That the story is almost certainly fictional does not diminish its power (much).

Execution itself being considered insufficient punishment, Colyngburne was ordered to be hung, drawn, and quartered. So first they part-hanged him, then they cut him open and pulled his entrails out for burning. But this was all done so quickly, that he was still alive. And as the executioner finally pulled his heart out, Colyngburne is said to have lamented: “Oh Lord Jesus, yet more trouble.”

His crimes had included the publication of seditious “writings in rhyme”, which he posted in public places. None of these were quite as funny as his supposed last words.

But as recorded by Brewer’s Dictionary, one of them became famous as a satirical summary of Richard’s regime, viz: “The Cat, the Rat and Lovell the dog/rule all England under a hog”.

The “hog” referred to the king’s heraldic emblem, a white boar.

The “dog” was his closest confidant, Francis Lovell. The “Rat” was Richard Ratcliffe, another cornerman. And the “Cat”, was William Catesby, who in the play at least, is the king’s chief henchman and dispatcher of enemies.

A historian of the early 16th century claimed that it was for this “small rhyme” poor Colyngburne lost his entrails.

But that may have been part of the Tudor propaganda campaign to paint Richard as an even blacker villain than he was. The rhyme-writer had also been encouraging the future Henry VII to return from France and overthrow the king, which must have been more to the point.

Colyngburne doesn’t feature in Shakespeare’s play. But another poet does, interestingly from an Irish point of view.

Whereas in Macbeth the role of foretelling the villain’s demise falls to a trio of Scottish witches – the “weird sisters” – in Richard III it is delegated to an unnamed “bard of Ireland”, who the King remembers “told me once/I should not live long after I saw Richmond”.

Unlike the witches, the bard doesn’t get a speaking part himself, never mind a whole sub-plot. He is, however, credited with powers of prophecy, which is more than the bardic profession itself would have claimed.

Shakespeare’s knowledge of Ireland was famously encyclopaedic: that’s to say, he got most of it from a book, Holinshed’s Chronicles. In the section on Ireland, this notes the political leverage, approaching blackmail, enjoyed by bards here, so that “the lords and gentlemen stand in great awe” of them and were careful to treat them well.

There were bards nearer to where Shakespeare lived – in Wales – but they must have appeared less mysterious.

Indeed, at the time of Shakespeare’s birth, many of them had fallen into such disrepute that a quality-control scheme had to be introduced.

In 1568, an Eisteddfod (a kind of Welsh feis) was organised to correct a situation whereby “vagraunt and idle persons, naming theim selfes mynstrelles Rithmers, and Barthes, are lately growen into such an intollerable multitude [that] gentlemen and other[s] by their shameles disorders are oftentymes disquieted in their habitacions”.

The aim of the Eisteddfod was to sort out the proper poets from the chancers, and then encourage the latter to “returne to some honest Labor and due Exercise”. I don’t know how well the clean-up had progressed by the time Shakespeare wrote Richard III.

In any case, needing a bard with believable psychic powers, he had to import one from here.

Another supernatural talent Shakespeare attributed to Irish poetry was pest control. That our bards could rhyme rats to death was common knowledge among English writers. Ben Jonson and Sir Philip Sidney mentioned it too, while Shakespeare gave the idea to Rosalind in As You Like It, when, as the target of an admirer’s poetry, she affects to have flashbacks to a past life as an “Irish rat”.

Maybe William Colyngburne was trying to import the tradition when targeting not just a rat, but also a cat, a dog, and a wild boar with rhyme. But I’d better not go into detail about the longer-term success of his efforts, in case anyone hasn’t seen the Druid play yet (or read any English history), and accuses me of plot spoiling.

Suffice to say that, in the end, it’s the king’s lack of a different kind of four-legged animal that proves decisive.