A city that takes the biscuit – Frank McNally visits Nice 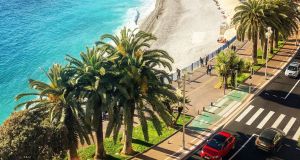 Nice: a rich cuisine yet it has the odd distinction of being synonymous with the world’s most boring biscuit

For such a beautiful place, with such a rich cuisine, the city of Nice also has the odd distinction of being synonymous with the world’s most boring biscuit. It may even be unique in having its name written across one variety: those flat, bland, sugar-coated rectangles that, as children, we resorted to only when the chocolate ones, pink wafers, and anything else interesting, were all gone.

Not that the city on the Côte d’Azur need claim responsibility for Nice biscuits. As far as anyone now knows, they originated in 19th-century Britain. Their strongest connection with France may have been a 1920s slogan: “Delightful as the town after which they were named.”

That sounds like desperate marketing now, but the plain-Jane biscuits are still going a century later. It must have worked.

Then there’s the strange concoction known as the Garibaldi, also flat and just as devoid of charm despite the inclusion of dried fruit. Garibaldis are named for one of the great heroes of Italian history. But Giuseppe Garibaldi was born in Nice – a frontier city that has changed countries many times – and remains probably its most famous son.

Again, however, the biscuit appears to have been a British invention.

As you might suspect from the taste, it too is a Victorian relic and acquired its exotic name around a time when, at the height of his global celebrity, Garibaldi visited England.

Another result of his popularity there is the colours in which, to this day, the Nottingham Forest football club plays. Those were adopted from Garibaldi’s red-shirts, which had fought not just in Europe but in South America, where they supported separatist movements in Brazil and Uruguay.

Like the shirts, the edible Garibaldis also live on, playing in the biscuit industry’s lower divisions. That they still sell is surely a tribute to the rebrand that made them sound more glamorous than they are.

Among their lesser-known names, inspired by the appearance of their squashed currents, are “dead-fly biscuits”.

Garibaldi’s popularity in Britain contrasted curiously with his reputation on this island. You might think his campaigns for a unified Italy would have made him a hero of Irish Catholics. On the contrary, his anti-clericalism and a tendency for his political enemies to include the Vatican, recommended him more to Protestant England.

In fact, when one of the greatest of all Irish soldiers volunteered to fight in Italy in 1860, it was for the Papal Armies against Garibaldi.

Myles Keogh later crossed the Atlantic to join the Union side in the American civil war, also with great distinction. He was still wearing his papal medal when he ran out of luck in 1876, at a place called Little Bighorn.

But he and Garibaldi might have been on the same side, at least once, had fate not decided otherwise. A military galactico of his era, Garibaldi was also courted by the Union army and gave it serious consideration.

The price of his principles proved too high. He wanted supreme command, and also demanded the ending of slavery as an explicit war aim. Of the latter, the best Washington could offer was that emancipation of the slaves would be an indirect result of the war. For that and other reasons, Garibaldi stayed out.

Visiting his home town this week, I didn’t see either of the aforementioned biscuits anywhere. But the long English love affair with the city has left other legacies. The big hotels on the sea front include such names as the “West End” and “Westminster”. And of course the seaside walk itself is the Promenade des Anglais, named for the 19th-century aristocrats who used to winter here.

Among the regular promenaders now are groups of machine-gun-toting soldiers, who have been walking up and down the beach since it became part of the frontline in another war two years ago. Aside from them, and some defensive bollards, there is no trace now of the carnage of Bastille Day 2016. In the still-balmy weather of early October, the promenade is alive with strollers, runners, and cyclists, none of them looking worried. Only the soldiers tend to glance over their shoulders a lot.

As befits a town with 2,000 years of turbulent history, the Niçoises are a resilient people.

But perhaps it was the mild climate that gradually softened their Cs. I noticed some of the runners pattering up and down the promenade were wearing a version of the city’s name on their shoes. That’s because it used to have a hard consonant in the middle, inherited from the founding Greeks, who called it after their goddess of victory, Nike.

1 Dublin house deaths: Three young children named
2 A Ryan Tubridy interview takes a terrifying twist
3 TikTok boom: The app exploding in popularity among Irish teenagers
4 Des Bishop: ‘The last time my mother spoke was to say sorry’
5 Some get up early to go to the gym, others because they slept in a doorway
Real news has value SUBSCRIBE