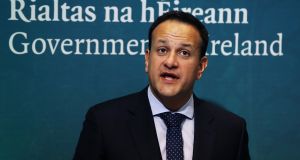 An Taoiseach Leo Varadkar’s dilemma is that even if he can be reasonably confident that Fine Gael will gain seats, there is no guarantee that the party will be back in government after an election. Photograph: Brian Lawless/PA Wire

Now that the third budget of the confidence-and-supply arrangement between Fine Gael and Fianna Fáil has been agreed, the big question is whether the two parties can agree on an extension of the deal for another budget or two. If they don’t the State could face a general election sooner than most people expect.

Taoiseach Leo Varadkar and Fianna Fáil leader Micheál Martin have initiated talks on an extension of the arrangement but there are divided views in both parties about the desirability of a new deal and what it should contain. This is reflected in the fact that the two leaders differ on how soon a decision needs to be made. Varadkar has suggested the talks should conclude in a month or so while Martin is focusing on the fact that the current deal will run until the Finance Bill is passed on December 11th.

Both leaders are under pressure from members of their respective parties to take a tough line. Senior Ministers are said to be urging the Taoiseach not to allow himself to get bogged down in drawn-out talks that may not result in a deal as that would give Fianna Fáil the initiative on the timing of an election.

For his part Martin is under pressure from some TDs not to underwrite Fine Gael for another two years. There is growing resentment among the party’s grassroots at the way they have facilitated Fine Gael’s continuance in office with no obvious benefit for their own party.

Both leaders need to think very carefully about what they do next. If he continues to ride high in the polls there will be obvious temptation for Varadkar to opt for an election at the earliest possible opportunity. He can argue that Fine Gael needs a mandate so that the main Government party is no longer obliged to govern at the whim of a handful of Independents.

Elements of the budget, particularly the failure to increase carbon taxes, demonstrate the weakness of the current arrangement which facilitates the politically expedient at the expense of difficult decisions that might generate any significant opposition.

Varadkar’s dilemma is that even if he can be reasonably confident that Fine Gael will gain seats, there is no guarantee that the party will be back in government after an election, particularly as trust with Fianna Fáil would hardly survive such a development. Martin also needs to think carefully about trying to drag out the talks indefinitely as that could give Varadkar the excuse to follow the advice of Ministers who are urging him to go to the country.

One way or another nothing will happen until the current phase of the Brexit talks reaches a conclusion. A deal between the European Union and the UK on a withdrawal agreement in the next month would alter the political landscape and could leave the door open for an election.