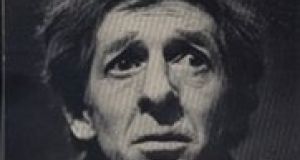 One thing not mentioned in Brian Maye’s centenary tribute to him earlier this week (Diary, Monday) was that, before he became a famous actor, Jack MacGowran was also a notable athlete.

His speciality was jumping, high and long. And while he may not have reached the Olympian standards of Flann O’Brien’s “jumping Irishman” – a globally admired phenomenon, at least according to the characters of At Swim-Two-Birds – he was certainly among the best in Ireland around the time that book was written.

As a student in the 1930s, he was Irish schools and colleges high jump champion. Later, he finished runner-up on several occasions in the national seniors. Among this newspaper’s archives, I find him leaping “41 foot 11 inches” in a hop, step, and jump at Trinity College in 1942. A year later, competing at the same venue, but back on the vertical plane, he cleared “5 feet 7”.

As with Flann O’Brien the writer, Jack MacGowran the athlete seems to have peaked in the war years. But then the latter went on to his second, and more illustrious, career, which was to make him synonymous with another Irish writer.

Maybe his athletic past helped MacGowran bond with Samuel Beckett, who himself had been a fine sportsman in his student days, and remains the only winner of the Nobel Prize for literature to also earn mention in Wisden, the cricketers’ bible.

But bond they did. McGowran became one of Beckett’s favourite actors, bringing out the comedy in his notoriously bleak plays, and thereby making them more accessible to audiences. He probably hit greater heights on stage, in the likes of Waiting for Godot, than he ever had in College Park.

Even so, the relationship wasn’t all about acting. Beckett enjoyed MacGowran’s company too. To this end, they often competed together in another popular Irish sporting discipline, involving a different kind of bar.

In his authorised biography Damned to Fame, James Knowlson describes a 1964 production of Endgame in London, starring MacGowran and Patrick Magee: “At lunch and after rehearsals, Magee and MacGowran consumed large quantities of Guinness or Irish whiskey. Beckett worried that he was matching his friends drink for drink, as well be might, for they were awe-inspiring drinkers. By the end of the month, he judged himself lucky to be ‘still on my feet’.”

I know of MacGowran’s athletic career mainly because he was a member of Donore Harriers, to which I now have the honour of paying subscriptions myself.

The club is in celebratory mode this year, its 125th anniversary, and so is more mindful than ever of its many former greats.

But I only heard of the MacGowran link while chatting to Willie Smith, a former running great himself, and now the club women’s coach, on Tuesday night.

While he was at it, Willie also mentioned two other stars of that era, Jimmy Reardon and Cummin Clancy. The latter (whose interesting first name we’ll come back to) died a few years ago, aged 90. The former is happily still with us, aged 93, 70 years after he competed in the 1948 Olympics, running the 400m.

He and Clancy – a discus thrower – went on to make history as the first of many Irish athletes to go to the US on college scholarships. The other things I know about Clancy (courtesy of Ian O’Riordan) is that he was 6 ft 2, had a 46-inch chest and 32-inch waist, and looked like a film star. So maybe he could have followed McGowran into acting. In the event, he chose insurance, always a safer bet.

His other distinctions apart, Clancy is the only person I have ever heard of who was christened Cummin. Lacking other explanations, I guessed there must have been an obscure saint of that name in his native Co Galway. Sure enough there was: the seventh-century Cumméne Fota (the last word there probably relating to fada, meaning “long”) who was a bishop of Clonfert.

But then I remembered that Mayo has a village called Kilcummin. Indeed, although only tiny, it earned fame as the place where General Humbert and his army landed in 1798.

And yes, that too was named for a Saint Cuimín, also called Cuimín Fada, who despite the suspicious coincidence, is considered a separate entity by scholars.

So there you are. Maybe Cummin Clancy is not the only latter-day person to have had the name. But until I hear otherwise, he appears to be outnumbered, two to one, by ancient holy men of that moniker. This could probably only happen in Ireland.