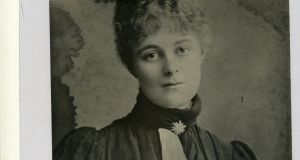 Maud Gonne. Photograph: Courtesy of the Yeats Society of Sligo

Exile was a key part of James Joyce’s strategy as a living writer. That it has followed him into eternity was not part of the plan. Since his death in 1941, there have been periodic hopes that his body would be repatriated eventually, like WB Yeats’s.

But eight decades on, the remains of a man who spent his life writing about Dublin are still planted in Zurich. They seem unlikely to move now.

Many things contributed to this. But as a new book called Maud Gonne’s Men suggests, Joyce’s (so far) permanent banishment may have been the price he paid for a vexed relationship with one notable Irish family.

Not that Joyce himself is among the men referred to in the title of Anthony Jordan’s work: a quartet comprising Gonne’s first love Lucien Millevoye, Yeats, her husband John MacBride, and the son of that marriage, Sean. Unlike them, the author of Dubliners and Ulysses had little or no part in her life. Even so, he did enough to earn a chapter in the book.

Their relationship got off to a bad start when, newly arrived in Paris in December 1902, Joyce called to Gonne’s house and was told she was in bed.

This was a lie, but an impeccably motivated one. As she explained in a letter next day, the truth was she was nursing a child with “diphtheria”, and was herself liable to infect visitors.

Within the prescribed quarantine, she could not safely meet anyone indoors.

So she suggested that if Joyce cared to return, they could adjourn to the nearby Trocadero gardens. Failing that, she looked forward to meeting him at a later time, because he had been spoken highly of by “Mr Yeats”. In the meantime, it was “a pleasure deferred”.

This perfectly reasonable response seems to have sent Joyce into a huff. The following February, in reply to his mother, he wrote sniffily: “I have not gone to see Miss Gonne; nor do I intend to”.

Please wire details about Joyce’s death. If possible find out if he died a Catholic

Maud would not be “Miss Gonne” much longer. The same day that Joyce called on her, she was marrying John MacBride. The marriage was doomed. But in the short while it lasted, Joyce’s attitude to Gonne did not improve.

In March 1905, news of the break-up moved him only to sarcasm: “I have read in the Figaro of the divorce of the Irish Joan of Arc from her husband, Pius the Tenth. I suppose they will alter the Catholic Regulations to suit the case...”

MacBride went on to become a Republican martyr.

Gonne too earned a place in the pantheon: what she lacked in not dying for Ireland more than compensated for by Yeats’s admiring poetry. In the meantime, Joyce ploughed his own furrow into literary immortality.

But when the great writer died, and was buried is Fluntern Cemetery, it was at first assumed – not least by his wife – that this was a temporary address and that his remains would soon return to Ireland, by then independent and soon to be a republic.

The new state was far from secular, however. And its attitude to the lost son in Zurich was summed up by the notoriously devout secretary of external affairs, Joseph Walshe, who ordered Ireland’s man in Berne: “Please wire details about Joyce’s death.  If possible find out if he died a Catholic”.

Catholic or otherwise, Joyce’s remains were still in Zurich in 1948. Then, after Yeats’s repatriation, admirers revived attempts to get him home too. There was a new coalition government in Ireland, ending 16 years of de Valera’s rule. Unfortunately for Joyceans, the incomers were just as pious. The first action of the minister for external affairs was to write to the pope, assuring him of their desire “to repose at the feet of your holiness”.

But religious differences aside, there may have been personal animus towards Joyce too. The minister’s name was Sean MacBride. When the subject of repatriation came before government, he refused to support it.

In those same years, a parallel debate concerned the homecoming of another body of sorts.  Joyce’s long-time patron Harriet Weaver had the manuscript of Finnegans Wake, on which he had spent 17 years. This was of enormous interest to scholars, and she had planned to donate it to the National Museum in Dublin, something for which Sean MacBride “brazenly” lobbied.

Then she changed her mind, influenced by Nora Barnacle, who had been embittered by Ireland’s indifference. So the writer’s last masterpiece didn’t come home either. Joyce’s death became a warped version of Daniel O’Connell’s. He gave his body to Zurich, his soul to literature, and his Wake to the British Museum.