Why the Government ignores climate change

Our national response is characterised by an unrealistically optimistic effect 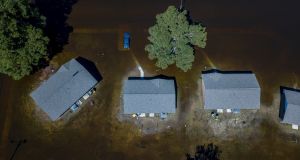 The UN’s intergovernmental panel on climate change (IPCC) presented its latest report on Monday. It was a forecast for all our futures. To say that the report was worrying is an understatement.

The predictions regarding climate change are edging towards the catastrophic. We are already seeing the effects. The world is one degree Celsius warmer than it was in pre-industrial times. A continued rise in temperatures will bring risks of drought, floods, extreme heat and poverty. With this will come increased and migration and all of the upheaval and human suffering it entails.

The report was launched with the approval of 195 countries and with an unusually high degree of consensus. There is some important advice in there on how we need to act to facilitate the urgent changes needed to deliver on the Paris Agreement of keeping global warming between 1.5C and 2C.

In the same week as all of this sobering news about climate change, Budget 2019 was unveiled. While there are some laudable offerings in the budget, initiatives to tackle climate change are notable in their absence.

Ireland will not escape from the negative effects of climate change. We have already seen drought and flooding. Population movement will affect us directly too. As people are forced to move due to flooding, poverty, fires and drought, more-northerly countries will become more attractive and we will need to be ready to respond. So why do we have a Government that is ignoring this issue?

One possible explanation is a well-known psychological effect known “optimistic bias” which is evident across all sorts of contexts. Individuals who smoke believe they have a lower risk of contracting lung cancer or disease compared to other smokers. First-time bungee jumpers perceive their risk of injury as lower than other jumpers. All drivers think they are less at risk of being in an accident than other drivers.

Although optimistic bias occurs for positive events – hence the success of the lottery – it appears to have a stronger effect for negative events. When teaching introductory psychology I can demonstrate the effect. We know that about one-third of all Irish people will die as a result of coronary heart disease. It is our biggest killer nationally. Yet when I ask in a class of 250 or so first year undergraduates whether they think they might be at risk of coronary heart disease, normally one or two students raise their hand. They invariably have had a direct family member who has been affected by the heart disease. Probability tells me that I have about 80 students in my class who will die as a consequence of heart disease, but as they don’t perceive themselves to be at risk, they are unlikely to change their behaviour. And heart disease and health behaviour are not pressing concerns.

And therein lies the problem. In many ways our current national response to climate change is very much characterised by this unrealistic optimistic effect. Because we have had no real experience and understanding of the implications of climate change, we are inclined towards not seeing the risk.

Climate change scientists ask governments to take unprecedented action. Government advises a carbon-tax increase will be essential in 2019. Just like my students, there are more immediate concerns so let’s put this on the long finger.

My guess is that Government, policymakers and many of us care profoundly about climate change. But if the ads on the buses moving around Limerick are anything to go by, there is an election coming. One of the things we know for sure from political psychology is that political systems and structures are profoundly important in shaping people’s behaviour. And politicians are people. So the budget was oriented to the big ticket items nationally – homelessness and, of course, taxation of the squeezed middle.

Elections can be won and lost in Ireland on very small numbers of votes. This makes our politicians very responsive in the short term but it also makes it difficult for them to sell the hard choices – the longer-term investments.

One of the things that is readily apparent around climate change is that we have very few people selling the hard choices. If people care about this issue as I believe they do, we could do with some leadership in this area. Climate change may not be a pressing concern now, but it will be soon.

It will matter to farmers whose lands will flood. It will matter to hospitals that need access to clean water. It will matter to home-owners whose houses may be at risk of flooding or fire. It will matter to our children and grandchildren who we will have let down in the most appalling way. A green future is not a bad thing. It is shorter commutes. It is cleaner. It is more time to spend with family and friends. It is a healthier diet. It brings forests to walk in. And reliable bus services.