The testimonies of three survivors of the mother and baby home institutions in Ireland - a mother, adoptee, and an adoptee’s family - in a mini-doc that accompanies Caelainn Hogan’s investigative book documenting the “shame-industrial complex.” Video: Dave O’Carroll/Philip Blake/Caelainn Hogan 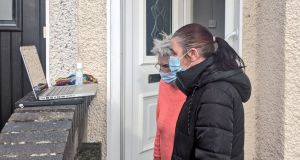 This is how an 82-year-old mother sent to Tuam had to watch the Government’s announcement to survivors of the mother and baby institutions. They were told to take time to read the report. But Rose McKinney has no way to access it. She wants a copy in her hands. Photograph: Caelainn Hogan

On the cold afternoon that the final report of the investigation into mother and baby institutions was released, an 82-year-old mother who had been sent to Tuam and separated from her children had to stand in her front garden with a mask to watch the Government’s promised consultation with survivors.

The rushed solution was a borrowed laptop wiped down desperately with hand sanitiser and placed on a brick wall, so technical glitches could be managed without risking her health.

The first page of the report, which Rose McKinney and other survivors were encouraged to read carefully, described the institution she had been sent to as a “refuge”.

'Don’t say sorry to me,' were the words one mother had for the Irish Government. 'Ask my forgiveness and help the living'

When the nuns in Tuam sent her to the Magdalene Laundry, they wrote under cause: “Penitent – twice”. Her two children were treated as an offence. Just to get the record that proved that, we had to chase multiple State agencies around the country, go to the gardaí to have a photo ID signed, and ask a favour of an archivist. So it was sadly unsurprising to realise, after years waiting for the findings of this investigation and after so many delays, that survivors were not even provided with a copy of the report to hold in their hands.

Even in this moment, as the Government speaks about “survivor-led solutions”, those who endured the institutions are still made to grapple for information and access. “I just want justice,” Rose told me.

The conclusion in the report that women were not forced into the institutions by the Church and State has put liability onto families, fathers and society. Rose told me the father of her daughter came to visit her in Tuam but was not allowed to see his child by the nuns. There were men denied the right to raise their children, even when they fought for it.

The status of illegitimacy, which the report acknowledges breached human rights, was enforced through deliberate and misogynistic legislation that stripped family rights from unmarried parents. Single mothers were seen as burdens on the taxpayer by a section of society that today would buy into the “welfare cheats cheat us all” school of thought.

Priests and social workers both told me working-class families in Dublin would often find ways to support their daughters or take in their children but wealthy farming families in the country would disown them.

Survivors have known for years about high death rates, the exploitation of children who were fostered out, the cruel impact of illegitimacy laws and the taunting of women as they gave birth. What has left survivors devastated when it comes to this report is the contradiction of their lived experiences, having relived trauma to give their testimony.

One confounding claim in the report is that no member of the Daughters of Charity who worked at Pelletstown was still alive. But I spoke to a nun who worked as a midwife in Ireland’s biggest mother and baby home, who remembered a woman coming in with two corsets strapped across her belly.

There are claims that there was no racial discrimination that affected adoptions while listing examples of how difficult it often was for children described as “half-caste”, “negro” and other slurs to get adopted. Evidence for injustices and abuse is dismissed only for it to be documented within survivor testimony.

A friend of Rose’s and a fellow survivor, Ann O’Gorman, had never told her family about her time in the institutions. When she did, her mother said she never would have sent her away. Her first-born child, her daughter Evelyn, died in Bessborough and she is still searching for her. “I’ll never be at peace until I know where she’s buried,” she says.

We now know that 9,000 children died in the mother and baby institutions. When the interim report was released on burials, a mother had to find out from the anonymised details that her son was buried in a Famine graveyard, despite having made multiple freedom of information requests to the State for records it turned out they had all along.

The Repeal the Seal campaign showed the overwhelming support for ending a culture of secrecy and for survivors to have the right to their personal information and records.

“Don’t say sorry to me,” were the words one mother had for the Irish Government. “Ask my forgiveness and help the living.”

Many survivors are people of faith but feel betrayed by silence within the church. I think of a Tuam survivor I met at the Knock shrine, devoted to his church, who was told to “leave it” by his priest when trying to search for his mother.

The challenge of a report compiled behind closed doors is trusting necessary questions have been asked. This report inevitably leaves many questions still unanswered.

Caelainn Hogan is author of Republic of Shame