The Irish Times view on the decade of centenaries: A complex history 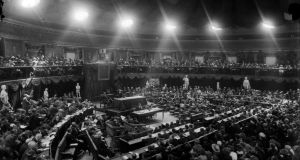 The Dáil in session shortly after the truce that brought the War of Independence to an end in 1921. Photograph: Courtesy of the National Library of ireland

The commemorations to mark the centenary of the War of Independence lost their way over the past year, as Tánaiste Leo Varadkar has noted. It is important that the Government gets a grip on the programme for the year ahead so that official ceremonies are conducted in an inclusive and respectful manner.

The first phase of the commemorations, which was built around the Easter Rising, captured the public imagination. It was always going to be more difficult and potentially divisive to mark what happened subsequently. The preoccupation of the Government with the Covid-19 pandemic and the restrictions it entailed over the past year took the focus away from the national plan. Instead there was a drift into a one-sided commemoration of violent incidents that occurred during 1920 with little attention being paid to other important events, including the work of the alternative administrative structures like the courts and local government reform initiated by the First Dáil.

The story of the southern unionist tradition, whose way of life, culture and political aspirations were forever impacted by partition, should also be acknowledged

The coming 12 months will mark the centenary of yet more violent acts but also of the Truce and the Treaty that marked the end of the War of Independence. The Government’s expert advisory group has recommended that a formal commemoration for all of those who lost their lives during the War of Independence be held on or close to July 11th, the centenary of the Truce. That should be done in an appropriate ceremony.

Among the difficult topics to be commemorated in the year ahead will be partition. This was not just a matter of high politics; it divided families, farms, parishes, dioceses and long-established business and social communities. It is important that the stories of groups on both sides of the border are commemorated in this phase.

Northern Ireland’s centenary poses difficult and sensitive challenges. While the identification of the unionist community with the northern state as part of the United Kingdom, and their pride in its existence and achievements cannot be overlooked, equally it has to be recognised that the nationalist community experienced serious alienation which influences politics to this day. The story of the southern unionist tradition, whose way of life, culture and political aspirations were forever impacted by partition, should also be acknowledged during the commemorations.

In that context it is noteworthy that the conciliatory speech of King George V at the opening the Parliament of Northern Ireland on June 22nd, 1921, was also a catalyst for moves towards the Truce which came into effect shortly afterwards. In marking the centenary of all of these events, President Michael D Higgins’s injunction to respect the position of “the other” should be borne in mind. His words should spur the Government into ensuring that the commemorations in the year ahead reflect the past in all its complexity.