Irish Times view on the year ahead: hoping for respite and renewal 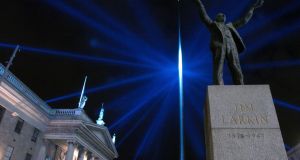 Relief may well be the dominant emotion of the first part of the year. If we can gradually return to the simple joys of social life, of family and friendship, the sense of renewal will generate its own energy. Photograph: Haydn West/ PA

This may not be a year of exaltation, but it will be a year of exhalation. We have been, for most of 2020, collectively holding our breaths. It has often felt as if our days have been taken up with waiting and hoping: this too will pass. There are good reasons to think that, in 2021, we will be opening up many of the hatches that have been battened down.

If all goes well with the mass vaccination programme against Covid-19, we will begin, tentatively, to move into a post-pandemic universe. But we will not be able to indulge ourselves for too long in the mere pleasure of release. As we look at the world with fresh eyes, we will see again all the urgent tasks from which our attention was stolen by the virus.

Relief may well be the dominant emotion of the first part of the year. If we can gradually return to the simple joys of social life, of family and friendship, the sense of renewal will generate its own energy. The parts of the economy that have been most horribly devastated – hospitality, travel and tourism, the arts – will not bounce back immediately. The habits of caution learned over the course of 2020 neither will, nor should, evaporate. But the idea that there is an end in sight – however grim the current reality – will surely lift spirits and elevate economic prospects.

In the wider political context, there will also be a feeling of respite. Donald Trump may not be, alas, about to disappear. Yet the mere absence of his malign attention-seeking from the White House will greatly diminish the toll his vulgarity, mendacity and toxic narcissism have taken on the collective psyche. Joe Biden’s civilised, calm and healing presence will, of itself, greatly improve the tone of international discourse.

Even Brexit, that great and wilful distraction, will gradually fade into the background noise. It is not, and perhaps never will be, as Boris Johnson’s election-winning slogan promised, “done”. The sheer sadness of our neighbour’s act of self-harm will weigh on us, as the reality of what it means for both islands begins to bite.

The implications for the political stability of the archipelago we inhabit will continue to unfold, most immediately in the Scottish parliamentary elections on May 6th, when the Scottish National Party will seek a mandate for a second referendum on independence. Yet, even if only out of exhaustion, the curtain will come down on a Brexit psychodrama that has been playing for the last five years.

These endgames – for the coronavirus, for Trump and for Brexit – will allow us to concentrate again on the things that matter most. As (we hope) the high tide of the pandemic time begins to recede, we will see two equal and opposite impressions left on the shoreline: of fragility and of possibility.

There is nothing good about the virus, and it may be only in 2021 that we really begin to take stock of our human losses and grieve properly for those it has taken. But it has delivered a necessary reminder of the fragility of our co-existence with nature. Those of us in the privileged West have been living in a bubble of complacency in which we take for granted our ability to treat with contempt the ecosystem on which we depend.

A crucial moment for humanity

The United Nations climate change conference in Glasgow in November is a crucial moment for humanity. We have to hope that the shock of the pandemic and the replacement of Trump by Biden will generate the urgency that is now imperative for survival.

If Ireland, which now takes up its seat on the UN security council for the next two years, is to have a credible voice there, we have to move from laggards to leaders on climate justice.

To this renewed awareness of fragility, however, we can also bring a revitalised sense of possibility. The pandemic has banished the fear of “big government” that has dominated politics since the 1980s. Big government is back, not for ideological reasons, but out of sheer necessity.

And so is big science – the astonishing development of anti-Covid vaccines in such a short time reminds us of the power of human ingenuity when it is supported by governments and amplified by international co-operation.

We can do difficult things, if we have the collective will to prioritise them. In Ireland, after the long political and social hiatus of 2020, those priorities are clear: decarbonising the economy, creating a sustainable and affordable system of housing provision, addressing the post-pandemic jobs crisis, especially its impact on young people and those in precarious employment, moving rapidly towards just and accessible healthcare and ending the shame of child poverty.

There has never been a moment in Irish history when the Government has deployed as many resources as it does now. This is an immense challenge, but also a golden opportunity to bend policy away from short-term crisis management and towards long-term achievement. By the end of 2021, we will be looking forward to the centenary of Irish independence. Let’s use the year to remind ourselves why it is worthwhile.