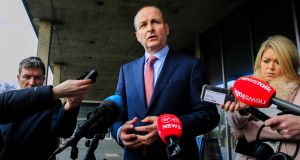 ‘When I hear Micheál Martin blaming a global economic collapse for what went wrong in Ireland, I recoil at the attempt to portray Fianna Fáil as the most innocent bystanders in history.’ Photograph: Gareth Chaney/Collins

The Fianna Fáil catch-cry, when the party looks back to the economic crash, is: “We all partied.” Looking back, however, it is much more honest to say: “We all suffered.”

No matter how much rewriting of the past is attempted, the last Fianna Fáil-led government was the worst government in Irish history. It brought the country to the brink of disaster and bankruptcy, unemployment reached record levels, forced emigration resumed, we were forced into a humiliating bailout and we lost our economic sovereignty.

1 Gardaí investigating four-lane motorway sulky race
2 Is coffee good for you?
3 Woman sues over catching Legionnaires’ Disease in luxury hotel spa
4 Gunman suspected of killing nine in Germany found dead in home
5 Bloomberg attacked from all sides in heated Democratic debate
6 I decided that day if I start working for myself at least I'll know where I stand
7 A Russian cruiser with ‘cannibal rats’: What other ‘ghost ships’ could be out there?
8 Newton Emerson: Martin and Varadkar must set out terms for Sinn Féin
9 Grave concern in North over London’s new immigration rules
10 Andy Farrell ticking all the boxes in advance of England showdown
11 Ireland wary of Peyper calling the tune as they head for Twickenham
12 Council to refuse applications for Airbnb-style short-term Dublin lets
13 Expert tips: A dentist on how to have perfect teeth
14 Teenager killed and two injured in Co Cork crash
15 Jim Mansfield Jnr denied permission to attend mother’s birthday party in Spain
16 Classic car dealer closes doors on prime Dublin 4 site
17 Miriam Lord: Photo-ops give way for occasional talks
18 Galway development could transform skyline with 21-storey tower
19 Coronavirus: Two passengers die after leaving Japanese cruise ship
20 Jewish council dismayed at Sinn Féin TD’s ‘unacceptable’ tweets
21 David Brady says he has witnessed the illegal payments of GAA managers
22 ‘If all the immigrants go back, who will work in the meat factories and do the crap jobs?’
23 Planners probe Dermot Bannon’s garden bath den
24 Martin tells party government may not be formed until April
25 The science of rest and why it is important to daydream
26 Firm behind luxury Dublin rentals to appeal short-term let ban
27 Pretty in pink for over a million in D4 hideaway beside Aviva
28 Owen Doyle: Day of the jackal may be coming to an end
29 Players impressed with Bono’s Irish pride and desire
30 I’m worried about my neighbour’s new ‘shed’ and what he intends to use it for
31 DUP pleads with UK to reduce salary threshold for migrant workers coming to North
32 Person claiming to represent ‘ghost ship’ owner comes forward
33 Would you kill one person to save five? Depends if you’re a millennial or not
34 Big tech ‘procedural queries’ delay decision on first data fines – watchdog
35 Fianna Fáil names team for formal government formation talks
36 ESB called out for ‘contributing to human rights violations’
37 Fine Gael should swallow its pretend humility
38 Love Island tribute to Caroline Flack hides the truth
39 How is UK changing immigration system and how will it affect Ireland?
40 Colum McCann on Israel-Palestine: ‘I was completely ignorant of what was going on’
Real news has value SUBSCRIBE