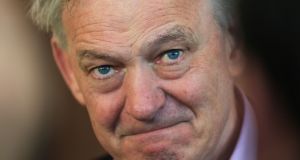 Peter Casey has put his name on the ballot paper in Taoiseach Leo Varadkar’s Dublin West constituency as an “obvious protest vote” against the Fine Gael leader, while focusing on winning a seat in the Donegal constituency.

On Wednesday morning Mr Casey, the businessman and former presidential candidate, submitted his papers to contest the Dublin West race, having submitted papers to stand in Donegal on Tuesday. There is no restriction on a candidate running in multiple constituencies.

Mr Casey said he was running as an Independent in Dublin West to “return the courtesy” for Mr Varadkar telling people not to vote for him in the 2018 presidential election.

Mr Casey said he was running in Donegal because that is where his home and business are but also in Dublin West to give people “an opportunity to register their disgust with Leo Varadkar”.

“He went in the presidential election and told people not to vote for me and I am just returning the courtesy and telling people here, giving them 10 reasons why they should not vote for Leo Varadkar. I am just giving people an opportunity to protest,” Mr Casey told The Irish Times.

Mr Casey said he would be running between 10 and 20 political campaign ads on billboards around the Dublin West attacking Mr Varadkar, explaining why people should not vote for him. He could not say how much he would be spending on the billboard ads.

“He will definitely top the poll when it comes to the worst taoiseach in history. He has got no moral compass. He just puts his hand up: the wind is going this way I will go this way,” he said.

He criticised Mr Varadkar’s handling of the Maria Bailey personal injury claim case, the overspending on the national children’s hospital and for handing the budget to “Simple Simon” – Minister for Health Simon Harris, whom he described as “one of the most inexperienced people”. Mr Casey was also critical of the Taoiseach for his management of “the biggest homeless crisis since the Famine”.

Mr Casey has previously come in for criticism over controversial comments he has made about the Travelling community and immigrants.

The former Dragons’ Den panellist received 9.5 per cent of the first preference votes during the European elections last May in the Midlands-North-West constituency, and was beaten to the final seat by Sinn Féin’s Matt Carthy.

Joan Burton TD, Labour Party candidate in Dublin West, said Mr Casey’s message of “division and hate” was not welcome in the constituency.

Ms Burton said the constituency was one of the “most diverse and inclusive” areas in the country. It includes areas with high proportions of ‘new Irish’ and foreign nationals, such as Ongar and Blanchardstown.

“It would be a shocking thing if a Dáil candidate notorious for creating division should use the occasion of this election to sow seeds of disharmony for purely political purposes,” she said.

“If that is his intention then I respectfully suggest that he think twice and turn back his cavalcade on the N3,” Ms Burton said.

The businessman rejected the criticism from Ms Burton. “I think Joan is worried about losing her seat. She barely scraped in the last time. Methinks she doth protest too much,” he said.

He stood over his comments in the presidential election campaign said that he still believed it was wrong to give special status to the Traveller community.

“You shouldn’t discriminate and you are discriminating by giving special status to a section of the community. That part is wrong,” he said.

Mr Casey said that if he was elected in both constituencies he would chose to represent Donegal in Dáil Éireann. In that event there would be a byelection in Dublin West.

Asked if he would support a Fianna Fáil-led coalition government should he be elected, Mr Casey said that he would decide on what was in the best interest of the people of Donegal.

Catherine Joyce, one of the managers of the Blanchardstown Traveller Development Group, criticised Mr Casey’s decision to run in Dublin West on a negative campaign against Mr Varadkar.

“I don’t think he is fit for office in any capacity in this country. He has run two previous campaigns riling up anti-Traveller and anti-immigrant feelings. I don’t think he should be running for any office. I think people should be vetted before running,” she said.

Ms Joyce expressed concern about Mr Casey running in a constituency where there has been a lot of support for the Traveller community and the accommodation of Travellers.

“I think he can upset the apple cart. I think Peter Casey would only come in and create a divide,” she said.

“The man has no track record in terms of the delivering progressive policies at a local or national level. Why he would want to run to me says he is just looking to rally up anti-Traveller feeling.”