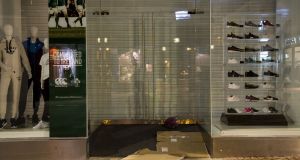 'It is vital that recent tragedies lead to a constructive discussion in the coming weeks and that our political candidates are aware of the realities of homelessness.' Photograph: Dara Mac Dónaill

Homelessness has quickly become an issue in the general election. The death this week of a young homeless woman in emergency accommodation in Dublin came as a homeless man recovered in hospital from serious injuries received when the tent in which he was sleeping was lifted by a utility vehicle during an official clean-up along the Grand Canal.

It is important that these tragedies lead to a constructive discussion in the coming weeks on the housing and homelessness crisis and that our political candidates are aware of the realities of homelessness.

The suggestion a few months ago from a byelection candidate that addiction and bad personal choices led people to become homeless was a worrying development in public discourse. It oversimplified a complex issue and put the blame on those who are homeless and vulnerable, while ignoring the choices made by those in positions of responsibility.

It also implied that those who are homeless had alternative and better options available to them, when they made these bad personal choices.

The reality could not be more different.

On October 5th, in a homeless service in the west of Ireland, a mother sat down with her support worker and her 15-year-old son, Brendan. The family had first accessed the homeless service in February 2018, when they feared they were about to become homeless. They had received a valid notice to quit from the accommodation they had rented for three years. The landlady wanted the property for her son. The family had been searching for months for somewhere to live, but could not find any accommodation they could afford or that would accept Housing Assistance Payment. Brendan was in second year in school at the time, and his mother was worried about the impact becoming homeless would have on him. He was a serious boy who wanted to do well in school.

Eighteen months later, when sitting with the family’s support worker, Brendan was very upset because he had failed his Junior Cert. His distress was obvious, and his parents and support worker felt completely helpless. His father tried to tell him that it didn’t matter. The support worker tried to work out with him how they might talk to the school about the situation.

Brendan struggled to explain his hurt and frustration at the difficulties he had encountered in his Junior Cert year. These included the different accommodation in which his family had lived on an emergency basis and the 40-mile commute to his school.

These challenges had impacted on his attendance, punctuality and ability to study. Brendan was in complete distress and he cried that he had failed. He has no confidence that he can complete his Leaving Cert.

A 15-year-old schoolboy so hopeless about his future is just one example of the harsh realities of homelessness. His mother also feels defeated. Eighteen months earlier her children were going to school, attending after school activities and coming home to hot dinners.

As a 15-year-old boy Brendan had not made bad decisions, but his confidence, self-esteem and resilience have been destroyed.

Sometimes referred to as the new economic homeless, these are people who would never have found themselves in homeless services previously. They are homeless because there is an inadequate supply of affordable housing.

Those working in homeless services, and the vast majority of people in the wider community, understand that people with a history of trauma, poor coping skills, a lack of education, a lack of effective help in their lives, are most vulnerable to entrenched homelessness. Those who have combinations of mental health difficulties, poor physical health and addiction will struggle to get the help they need while they are living on the streets. We know and understand that with secure housing and appropriate supports our most vulnerable citizens can get well and live ordinary lives. We also know that it is difficult to always make good decisions when caught in a cycle of homelessness.

What our society urgently needs is that good choices are made to address and resolve the housing and homelessness crisis so that families do not fall into homelessness. We need good choices from our politicians to ensure adequate housing that offers all families the security they need to be safe.

We need our political leaders to make good choices, so that Brendan’s family in turn can make their good choices a reality

Public commentary that compounds the stress and trauma experienced by people who are homeless is not helpful at this juncture. As we collectively work to address this crisis, we also need empathy and understanding in the public discourse during the general election campaign.

1 ‘I woke up the next day in a guy’s house covered in bruises’
2 Dublin stabbing: Parking space was at centre of previous rows, gardaí told
3 Soreness is good, scales are pointless: The 10 biggest myths in fitness
4 Miriam Lord: Lady Lou crowned the People’s Taoiseach at Liberty Hall
5 Coronavirus: More matches will be cancelled if necessary, Ross says
Real news has value SUBSCRIBE