Michael McDowell: Nphet allowed get too big for its boots 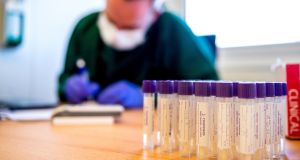 Who is responsible for what appears to be a very mediocre test and trace system? Does the Department of Health have any responsibility in these matters? Photograph: David Hecker/Getty Images

It was inevitable, in some respects, that the relationship between National Public Health Emergency Team (Nphet) and the Government would reach a point of crisis. It was inexcusable for the Government and the nation to learn on the Sunday evening 9pm news that the move to Level 5 was being mooted for the following day.

It was, no matter how you call it, a political hand-grenade thrown into the Cabinet room. Nphet must have understood its effect. Was what done was a deliberate stratagem to impose its will on the Government and through it on the people.

1 Cork shootings: ‘Devastation was impossible to imagine’, funeral hears
2 Storm Aiden prompts nationwide weather alerts for Halloween
3 US election: ‘Trump would not be caught dead here unless he wanted our votes’
4 ‘Attention-seeking’ Shane Ross has a spiky joust with Regina Doherty
5 First full moon on Halloween night since 1955 will be rare ‘blue moon’
6 Strong earthquake with a magnitude of up to 7 hits Turkey and Greece
7 The real Contagion virus is out there and it’s causing virologists to worry
8 ‘Clothes are not essential’: Minister Damien English defends retail restrictions
9 Difficult to predict when Covid-19 cases will peak during winter, HSE chief says
10 Trump vs Biden: Stakes are high for the Irish economy
11 Unanimous or unfair? Opinions divided on Sam Bennett’s Vuelta relegation
12 Coronavirus: Ballyjamesduff in Co Cavan over 5 times the national incidence rate
13 Gates at Dublin’s Phoenix Park to close over weekends
14 Two hundred Irish retailers for all your online Christmas shopping
15 Kim Kardashian’s father appears in hologram for birthday present
16 Coróinvíreas and arán banana: A new English-Irish dictionary covers the pandemic
17 HSE ‘at war’ with then taoiseach and minister in 2019, says Reid
18 Cosy and colourful: this Wicklow cottage is a décor delight
19 Award of €189,000 for woman with ‘shark bite’ scar
20 Tighter regulations for car makers will drive buyers to choose electric
21 Coronavirus: Let’s not do the same thing and expect a different outcome
22 Majority of Irish Covid-19 cases come from variant that originated in Spain – study
23 Man found guilty of murdering girlfriend during drinking session
24 Ronan O’Gara: Ireland need to be braver than usual ‘in a shoot-out for gold’
25 Will remote working become the norm?
26 Bought a desk or a chair? Revenue rules out tax relief for home workers
27 Cork shootings: Father and sons to be buried in two separate funerals
28 New pay deal for State employees cannot come at any price, says McGrath
29 Five lessons of Stoicism: What I learned from living for a week as a Stoic
30 The perfect traditional Irish barmbrack
31 Stephen Collins: Common sense must prevail in Brexit fisheries row
32 Dublin communities brace themselves for weekend fireworks after recent lull
33 The Movie Quiz: Maureen O’Hara was raised in which leafy Dublin suburb?
34 Jackie Tyrrell: We’ve got the championship back. But where’s the physicality?
35 Six Nations - France v Ireland: Kick-off time, TV details, permutations, team news and more
36 Kennedy Wilson sells Baggot Plaza for $165m
37 Five nursing homes receiving ‘intensive’ State support as they battle serious coronavirus outbreaks
38 Six within 60: homes to buy within an hour of the M50
39 Kanturk farm shootings: A timeline
40 Losses balloon at Virgin Media Ireland but revenue rises
Real news has value SUBSCRIBE