Level 3 a ‘closure order’ for pubs and restaurants 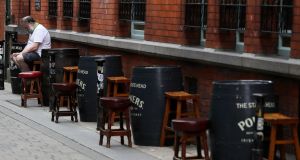 A man sits outside a pub in Dublin’s city centre. Pubs in the capital which don’t serve food have been closed since March. Photograph: PA

Nationwide restrictions limiting all pubs and restaurants to outdoor seating and a maximum of 15 customers will be an effective closure order for many struggling businesses, industry groups have said.

Under Level 3 measures, wet pubs, restaurants, cafes and bars serving food can remain open for takeaway, delivery and outdoor dining/services to a maximum of 15 people. Indoor dining is not allowed.

Pádraig Cribben, chief executive of the Vintners’ Federation of Ireland (VFI), which represents pubs outside of Dublin, said the restrictions were “the equivalent of closure for the vast, vast majority” of pubs.

The reality was businesses could “not survive” with public health limits of 15 customers outside in place, he said.

Similarly, the Restaurants Association of Ireland (RAI) said the Level 3 restrictions with outdoor dining only would mean remaining open was unviable for many restaurants.

RAI chief executive Adrian Cummins said: “Outdoor dining with a maximum of 15 diners is not viable for restaurants in Ireland; our climate isn’t conducive to providing this service to customers.

“Ireland is now the only country within the European Union with a ban on indoor dining and the RAI is calling on the Government to publish the evidence underpinning the ban,” he said.

The country moved to Level 3 of the Government’s long-term Covid-19 plan – already in place in Dublin and Donegal – for three weeks from midnight on Tuesday.

Under the restrictions, pubs, cafes and restaurants are limited to outdoor dining only, with a maximum of 15 customers, and takeaway and delivery services.

In Dublin, drink-only or “wet pubs” will remain closed, with pubs that serve food permitted to offer outdoor dining only.

Raymond Aughey, owner of the Squealing Pig bar in Monaghan town, has been open for just under a month but will have to close again due to the new restrictions.

Mr Aughey, a publican for 29 years, said it would be impossible to remain open with limits of 15 customers outdoors. The bar had reopened in early September serving food, and employs 30 staff, who will be laid off.

The new restrictions to outdoor-only seating and strict limits on numbers meant remaining open was “just not worth it”, Mr Aughey said.

There was little practical difference between Level 3 or Level 5 restrictions for publicans, he said.

Of 61 pubs in the VFI’s Monaghan branch, 55 had reopened last month, and many now would be facing an inevitable decision to shut again, he said. This was despite spending “a fortune on PPE, screens and stock”, he said.

Mr Aughey’s pub is near the Border with Northern Ireland, and “the pubs a couple of miles from us are still open”.

This would likely encourage people to travel across the Border to socialise, as “the youngsters have to go somewhere”, he said. The restrictions on pubs would also likely lead to more house parties, which he said were the “elephant in the room”.

Mr Aughey, who is also a Fianna Fáil councillor, said publicans had been “left high and dry for the last six months” by the Government.

A Co Louth publican and hotel owner criticised the communication around the introduction of the Level 3 restrictions and called for an all-island approach to the crisis.

Mark McGowan, who runs Scholars Townhouse Hotel in Drogheda and the nearby Peggy Moores pub, said the two businesses, which employ nearly 50 people between them, are on target to be down €1 million in turnover this year.

He said he was frustrated with the impact on the wider hospitality industry and the lack of communication with those who worked in the industry.