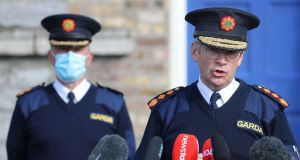 Travelling for work or any other purpose in the State will “feel very different from tomorrow” - with added congestion inevitable - due to the ramped by Garda operation for Level 3 of the Covid-19 pandemic, Garda Commissioner Drew Harris has said.

A total of 132 fixed, or permanent, checkpoints would be placed daily on motorways and other arterial routes nationwide, with traffic funnelled into one lane on those roads, he said.

“They are to make sure people stay in their county and only travel whenever it is absolutely necessary… or their journeys would be very difficult,” Mr Harris told the media, explaining what is being put in place as part of the new pandemic policing operation - an expanded Operation Fanacht - from midnight on Tuesday.

“That’s just a salutary warning about what travel conditions are going to be like. You only have to look what happens on any motorway when it goes from two or three lanes into one. It’s inevitable there will be delays.

“So we are saying to people, and just to warn them, travel will feel very different compared to today. We will have a very visible presence mobilised and we’ll carry that on in the weeks.”

Though Dublin and Donegal were already on Level 3, the policing operation in Dublin from midnight on Tuesday would still “feel very different” as there would be such a large number of checkpoints.

In Dublin and Donegal, 2,000 checkpoints had been carried out last week and the number of people coming over the Border into Donegal by road had dropped by 50 per cent as a result of the increased Garda presence, Mr Harris said.

Mr Harris said he did not believe the force needed new powers for policing Level 3 across the State. Since enforcement powers were granted under Covid-related laws, stipulating movement be restricted to a certain radius, they had been used “342 times… out of hundreds of thousands of interactions with people”.

“The requirement for them [enforcement powers] is minimal but we are watching this very carefully,” he said.

“But people understand that at Level 3 it’s ‘Stay without your county and only go to your work place if absolutely necessary’ and we’ll be on the roads to educate the public on that message.”

If gardaí discovered people flouting the public health guidelines, including not leaving their own county save for exceptional circumstances, gardaí would brief the Government and request new powers, he added.

However, this has not been the experience over the past six months and gardaí also had a range of long-standing policing powers to use against people – including public order and road traffic legislation.

Tánaiste Leo Varadkar suggested on RTÉ’s Claire Byrne Live on Monday night that new enforcement powers were in the offing for the Level 3 policing operation, though Minister for Justice Helen McEntee clarified on Tuesday no new powers were planned at present.

That means while people are being asked not to leave their own county, other than for necessary work or other urgent matters, anyone not adhering to that advice was not breaking any law and could not be prosecuted.

On the problem of house parties, Mr Harris said they were not new to the pandemic and while gardaí could not enter a private residence without a warrant – the arrival of gardaí was often effective in dispersing crowds.

An additional €15 million will be required for the Garda to ensure the policing pandemic operation could be run for the remainder of the year.

While members of the force were being “mobilised” nationwide to police Level 3 measures, efforts would be redoubled to reach out to vulnerable people, including the elderly and isolated and those at risk of domestic violence and abuse, the Commissioner added.

“Beyond all of that we will also be keeping up or focus on organised crime; intelligence gathering and investigations will carry on.”