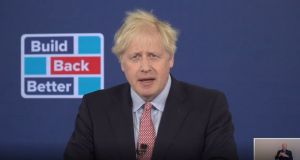 Boris Johnson has promised to defeat coronavirus and to build a “New Jerusalem” from the wreckage of the pandemic with improved productivity, more housing and a better health service. Addressing a virtual Conservative party conference, the prime minister dismissed reports that his own experience of coronavirus had left him weak and unfocused.

“I have read a lot of nonsense recently, about how my own bout of Covid has somehow robbed me of my mojo. And of course this is self-evident drivel, the kind of seditious propaganda that you would expect from people who don’t want this government to succeed, who wanted to stop us delivering Brexit and all our other manifesto pledges,” he said.

Mr Johnson said the pandemic had revealed some of the British economy’s weaknesses including a lack of skills, inadequate transport infrastructure and a shortage of affordable housing. He promised to “reform our system of government” as well as improving infrastructure and spreading opportunity more widely and fairly.

He confirmed plans first announced last year to expand wind power, to build more hospitals and to reform the social care system. He reaffirmed a Conservative manifesto commitment to introduce 95 per cent mortgages in a move he claimed would create two million more owner-occupiers.

After the speech, Downing Street declined to offer any details of how these policies, and Mr Johnson’s promises of more one-to-one tuition in schools and to introduce a digital ID, would be implemented. And the prime minister did not specify how Britain would defeat coronavirus, although he said that life would be back to normal in time for next year’s Conservative party conference.

“I can tell you that your government is working night and day to repel this virus, and we will succeed, just as this country has seen off every alien invader for the last thousand years,” he said.

“We will ensure that next time we meet it will be face to face and cheek by jowl, and we are working for the day when life will be back to normal, flying in a plane will be back to normal, and hairdressers will no longer look as though they are handling radioactive isotopes, and when we can go and see our loved ones in care homes, and when we no longer have to greet each other by touching elbows as in some giant national version of the Birdie dance.”

The prime minister sought to contrast the Conservatives’ political approach with Labour’s, asserting that his government’s expansion of the state and erosion of personal liberties during the pandemic had been reluctant.

“We are proud of this country’s culture and history and traditions; they literally want to pull statues down, to rewrite the history of our country, to edit our national CV to make it look more politically correct,” he said.

“We aren’t embarrassed to sing old songs about how Britannia rules the waves – in fact, we are even making sense of it with a concerted national ship-building strategy that will bring jobs to every part of the UK, especially in Scotland, and we believe passionately in our wonderful Union, our United Kingdom – while the Labour opposition who have done frankly nothing to defend the Union, and continue to flirt with those who would tear our country apart.”