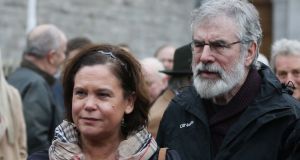 Hard to imagine that Meghan Markle and Mary Lou McDonald have anything in common, but some things transcend ideology and circumstance.

Each has lost their ring of confidence; the dazzle in their smile. It’s gone and in a very short space of time.

Meghan’s dazzle was her trademark, but a recent visit to the Royal Variety Nursing Home showed the old troopers cheering her up. Mary Lou’s smile was the more impressive because it was a rare thing. She put her cranky self aside, briefly, on her election, unopposed, to the presidency of Sinn Féin. In less than a year, cranky Mary Lou is back.

Can it be coincidence that the dazzle disappeared at around the time it became apparent both women no longer controlled their own decision making. They should have had an inkling. It goes with royal territory. And Mary Lou should have got the clue from that unopposed election. I’m sure Michelle O’Neill did.

Even as McDonald’s popularity was at its highest, polls found Sinn Féin the most 'toxic' party

I wouldn’t bet on who bolts first, but Meghan will have the ballast of a core feminism that has sustained her before. Mary Lou might have to make a choice.

She started her leadership bold as brass and true to form. Her command of controversies like the cervical scandal, vulture funds, housing and health are second to none. Like her or hate her, you could not deny her power. She had honed her parliamentary craft as Gerry Adams’ number two. The polls approved Adams’ departure and last April, a post-peace process youth indicated they would vote Sinn Féin at record levels.

The nine months since have proved an unhappy gestation. There was the disappointing presidential showing of Liadh Ní Riada (who knew Michael D was invincible?) and the downward trend in the polls (trend is all that matters in polls).

Then there were the disastrous scenes at the Strokestown eviction. The violence that followed may have been blamed on dissident Republicans but the equivocal response of Sinn Féin TD Maurice Quinlivan and Senator Paul Gavin to the events was not helpful. If optics matter, Strokestown raised the question of who was calling the shots in the party.

On the question of the Border poll, she happily announced now was not the time – to the great relief of everybody worried about the fallout from the Brexit backstop. Within hours she changed position. There were other mis-steps, but the Border poll issue found Mary Lou defensive and rationalising that she wasn’t being controlled by shadowy figures.

Nobody ever said Gerry Adams was controlled by shadowy figures. Adams’ genius was to always appear to be in plain sight. At her inauguration she said Adams was her mentor. Political success often depends on the delicate art of murdering the mentor – metaphorically speaking, of course: remember how Margaret Thatcher was cut off without a penny by her protégé John Major.

The first time the influence on Sinn Féin of hitherto unknown Republican figures manifested publicly was when the Máiría Cahill rape, by a member of the IRA, came to prominence in 2014.

Cahill was horrifically trolled on social media. Suddenly it stopped: a diktat from a senior Belfast Republican with a conviction for firearms offences, had the power to stop the online abuse.

The public are not fools. Even as McDonald’s popularity was at its highest, polls found Sinn Féin the most “toxic” party. In poll terms that means least likely to get transfers, but the subliminal meaning is not lost.

Yet again, a year has ended with Máiría Cahill calling in vain on Sinn Féin to acknowledge the cover up of an investigation into her rape following a meeting in November with Mary Lou. But repetition has not hackneyed her truth: a comprehensive review of her case in 2015 by Sir Keir Starmer – then a former director of public prosecutions for England and Wales and now a Labour MP – excoriated the Northern Ireland Public Prosecution Service.

And the Police Ombudsman revealed that police intelligence had ascertained that Sinn Féin had suspended the perpetrator and had facilitated his exiting the country.

At that time Sinn Féin had TDs in Dáil Éireann.

Once more Mary Lou McDonald refuses to acknowledge the investigation and cover up. Despite Máiría Cahill’s assertion that this refusal repeatedly re-traumatises her.

I have no doubt a woman with McDonald’s smarts will not find it easy to live with a culture of second guessing the desires of men in control. And the toughest stand to take in this life is against your own tribe.

The horns of McDonald’s dilemma are tribe and gender. She undoubtedly thinks of herself as a feminist, and deployed it well to control the party on the repeal referendum.

But leaving all its inter-sectional interests aside, the deepest pathology of feminism has been to look out for a woman treated unjustly. Yet on Máiría Cahill, she seems caught between nationalism and feminism, choosing to protect the men.

She talks about restorative justice in Northern Ireland. In her new book Rape, Germaine Greer discusses it too, as a tool in the healing of rape trauma and says: “There is nothing restorative justice can achieve if the perpetrator does not accept some responsibility, does not admit that he or she is guilty and does not repeat.”

Mary Lou McDonald’s actions in not acknowledging the cover up puts Sinn Féin itself in the position of a perpetrator who doesn’t care about a victim’s or a community’s forgiveness.

She could do worse than choose feminism over a toxic brand of nationalism. And if she’s going to be hung out to dry, better to be hung for a sheep as a lamb.

Anne Harris is a writer and commentator

1 Woman stranded in Ireland due to pandemic has ‘miracle baby’
2 Don McLean: ‘My ex-wife is the worst person I ever knew’
3 ‘Difficult months ahead’: Europe prepares for more pain as Covid cases soar
4 Almost 20% of staff at Dublin hospital have antibody evidence of Covid-19 infection
5 Two hundred Irish retailers for all your online Christmas shopping
Real news has value SUBSCRIBE