MacGillycuddy’s Reeks landowners' goodwill should not be taken for granted 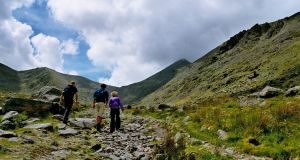 Carrauntoohil, Co Kerry: In 2003, the number of overseas visitors who participated in hillwalking or hiking was 168,000; in 2017, the figure was 2.352 million. Photograph: Getty

It will doubtless surprise many that Ireland’s highest mountain is privately owned and that the surrounding slopes are actively farmed. The situation on Carrauntoohil contrasts sharply with the highest mountains in England, Scotland and Wales. These are either within National Parks or owned, as in the case of Scotland’s Ben Nevis, by charitable trusts. Ironically, the western Macgillycudy’s Reeks once resided in State ownership but were then purchased by ancestors of the present landholders.

In October this year, an email was forwarded to walking clubs informing them of the need to submit an event sheet to MacGillycuddy Reeks Mountain Access Forum prior to any organised walks/hikes on these mountains. Groups of 10 or more accessing the mountain range would, additionally, be required to provide, in advance, a copy of public liability insurance.

The email also specified: “We respectfully request that your clubs access the Reeks from one of the main access points only – Breanlee, Cronin’s Yard, Lisliebane or Strickeen where car parking can be facilitated appropriately.” On the MacGillycuddy Reeks Mountain Access website it also states: “You must notify us prior to the event taking place by completing the event form, failure to do so may result in access being denied.”

We are trying to minimise erosion, avoid traffic congestion and work with the landowners so as not to disrupt their farming activities

Arising mainly from fear of litigation among landowners, the email raised concerns in hillwalking circles because it appeared to represent an erosion of the traditional right to roam the uplands. Mountaineering Ireland stated that it was “concerned that group access to the Reeks should not be restricted to the four main access points and that clubs should be free to access the Reeks from other points.”

Roger Garland, chairman of Keep Ireland Open, agreed that the vast numbers of walkers accessing the Reeks poses a serious erosion problem but stated he was unable to see how the use of event sheets would help. “Presumably if the [walking] clubs co-operate, which is problematical, and it is felt that there are too many clubs seeking access on the same day some clubs will be advised they cannot come on that particular day.”

In reply, Patricia Deane, manager of MacGillycuddy Reeks Agri Environmental Scheme stated “We are trying to minimise erosion, avoid traffic congestion and work with the landowners so as not to disrupt their farming activities. These are the reasons why these small group forms are being requested, a small request to help manage the issues”.

The background to these problems can be traced to the recent escalation in hillwalking in Ireland. In 2003, the number of overseas visitors who participated in hillwalking or hiking was 168,000; in 2017, the figure was 2.352 million, while the figure for domestic holidaymakers was 1.2 million. Kerry’s MacGillycuddy’s Reeks have seen a particularly steep increase in walker numbers. Here, the attraction of Ireland’s highest mountains draws hordes of visitors with 125,000 recreation seekers exploring the range during 2017.

Access to this superb mountain range is only possible with the goodwill of landowners. By allowing recreational access, they surrender privacy and can also become victim to the small number of irresponsible recreationalists who leave gates open, damage fences and allow dogs to worry livestock. Meanwhile, they watch from the wings while hotels, hostels, restaurants, hiking guides and transport companies cash in on a walking boom, which presupposes unpaid access to their lands.

The situation on Carrauntoohil contrasts sharply with the highest mountains in England, Scotland and Wales. These are either within National Parks or owned, as in the case of Scotland’s Ben Nevis, by charitable trusts.

Now, they have been saddled with an additional worry: insurance. A landowner’s responsibility towards hillwalkers was supposedly clarified by the Occupiers’ Liability Act 1995. The test for occupier’s liability towards recreational users of land was set as a rigorous one and defined as acting with reckless disregard for the person or property of the person. The tendency for insurance companies to settle compensation claims out of court while afterwards raising premiums and a decision to award €40,000 to a walker injured in the Wicklow Mountains (later overturned on appeal) has shaken farmers’ confidence. The wording of the Act, which allowed the Wicklow case be taken, is still on the statute books. In such circumstances, it can easily appear to farmers that they are in a “heads you win, tails I lose scenario.”

Objectively speaking, it is quite difficult to successfully sue a landowner in Ireland, but there can be no guarantees and this is the core of the issue. There is already enough pressure on the agricultural sector without this added headache. As overseas visitors, who partake of hiking and walking in Ireland, now contributing an estimated €1.3 billion to the economy, the time has come for Government action.

A much promised, but continually deferred, indemnity scheme that would protect farmers who allow recreational use of the uplands must be implemented immediately, with the low risk to the insurer allowing for cost effectiveness. Occupier’s liability must cease being a backdoor where landowners are obliged to carry the risk for misfortunes befalling recreational users of the uplands.

– John G O’Dwyer is author of Pilgrim Paths in Ireland