Tax injustices for caring relationships have not gone away

On their first anniversary of their marriage to avoid inheritance tax, friends Matt Murphy and Michael O'Sullivan discuss what they believe makes a successful marriage. 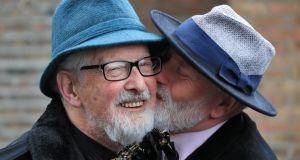 Matt Murphy (83) and Michael O’Sullivan (59) have just celebrated their first marriage anniversary. They have been friends for 30 years. In recent years, Michael has been Matt’s carer.

They married even though they are not sexual partners so that Michael could inherit Matt’s house as thanks for his care. Spouses can legally avoid all inheritance tax no matter what the value of the home. Unless exempt, Capital Acquisitions Tax (CAT) or inheritance tax is set at a rate of 33 per cent and there are three different thresholds when it kicks in.

The reaction from the country was ‘more power to them’.  That’s because people value caring but it also reflects public distaste for our labyrinthine, poorly understood and often unjust inheritance laws.

Why should Murphy be prevented from willing his house to a friend who is saving the State a fortune? The odd thing is, that if inheritance of the house were the only issue, the two men would probably have been covered by a different exemption up until two years ago.

In the case of inheritance or gift of a shared home, Section 151 of the Finance Act 2000 provided for exemption from CAT and from inheritance tax not only for non-marital sexual partners but also for others, subject to certain conditions.

For example, the surviving person must reside in the home for three years prior to and for six years after the inheritance, and must not own another property.

In December 2016, this exemption was amended to now apply only to dependent relatives, defined as those who are incapacitated. And the threshold for incapacity is high: a person who is permanently incapacitated by say, visual impairment may not necessarily qualify as totally incapacitated or incapable of maintaining himself or herself by working. (These strict criteria are waived in the case of someone over 65.)

No-one would begrudge the two men finding a solution to their problem. The problem is that aside from the provisions outlined above, the only way that inheritance tax can be avoided is through resorting to marriage.

This causes another injustice. Take, for example, two sisters who have always lived together and cared for each other, one aged 72 at the time of death and the other aged 63. The surviving sister will not be entitled to the full dwelling house exemption, unless she is completely dependent. She will be liable for tax at 33 per cent for anything she inherits that is valued at more than €32,500.

Obviously, they will be unable to avoid tax by marrying because they are siblings.

And yet, the very same criteria apply to these sisters as apply to Murphy and O’Sullivan. As a society, we should be encouraging people to care for each other.

There are other circumstances that seem unfair. Many people have had to sell homes they have lived in all their lives because they cannot afford the inheritance tax. For example, an adult child inheriting from a parent has a life-time limit of €320,000 on what they can inherit.

Relatively modest homes in Dublin and elsewhere are often valued far above this threshold. One can be property-rich on paper but cash-poor in reality, particularly if it is the person’s home and he or she has no desire to sell.

Presumably, the dwelling house tax exemption legislation was changed because people were exploiting it. But could it not have been re-framed instead, so that a caring, dependent relationship qualified, instead of just a condition of complete dependency in a surviving relative or being over 65?

Many laws around taxation arose originally because people recognised the unique nature of marriage, particularly because marriage more often than not results in children, a uniquely vulnerable subset of humans who need constant care. As family law evolved, it was recognised that spouses should have an automatic right to inherit and the highest financial thresholds for inheritance are set for children.

But in our increasingly individualised world, support for marriage is being eroded, despite demonstrable costs to society. We were told that marriage had nothing to do with children during the Marriage Referendum and now Murphy and O’Sullivan have demonstrated that marriage has no necessary link to sex.

How elastic a concept is marriage? When does it become unrecognisable? There are alternatives to continually diluting the concept of marriage.

Way back in 2006, a report by a committee chaired by Anne Colley, Options Paper for Domestic Partnerships, suggested that there could be other forms of domestic partnership with limited legal benefits, such as in relation to maintenance and also inheritance of a shared home.

It specifically ruled out non-sexual partnerships, but why? Why should the State not recognise the benefits to society of caring, dependent relationships that are non-sexual?

Perhaps laws could be framed so that people could nominate others whom they wish to receive certain clearly delineated benefits as registered domestic partners. It would have to be carefully framed to prevent the wealthy exploiting it, as they exploit every loophole, but it should not be beyond the ability of legislators if they really have an interest in encouraging caring relationships of all kinds.