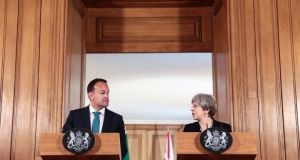 Sir, – I welcome the fact that the Brexit talks have finally moved past members of both the Irish and British government repetitively talking in unison about their joint commitment to a seamless and invisible Border and wrongly creating the perception that the status quo on our island can be easily maintained and it will all be right on the night. In the context of the British government publicly announcing its intention that the UK will cease to be part of the single market and customs union, this was always going to be difficult to achieve. The extent of the difficulty has increased as a result of the Conservative Party’s dependence on the DUP to remain in government.

Our Government did a good job in placing our Border concerns at the centre of the EU’s initial engagement with the UK together with issues relating to the continuing residence of EU citizens in the UK and the UK’s debt payment to the EU. If the later two issues are resolved, however, the Government should tread carefully and not lose sight of political and economic reality by waiving the green flag of republican nationalism in search of Southern public applause and perceived electoral gain.

It is obvious to all that the Brexiteers and the UK government to date have been incapable of proposing substantive arrangements that can preserve the island of Ireland as a borderless single economic and trading entity post-Brexit. It is politically important to do everything necessary to force the UK Brexiteers to confront reality and the UK government discuss what arrangements it is proposing to ensure we do not return to past divisions on this island and do anything that could act as a catalyst to the resumption of sectarian violence. However, we also need to ensure we do not lose sight of the importance Northern unionists attach to their British identity and the impact of flags and symbols on our island.

As a consequence, the Taoiseach and Government Ministers should take care in the language used, the nature of Government-inspired “off the record briefings” and assess the value of heated public confrontation.

Having highlighted our valid and very real concerns in the initial phase of talks and agreed the seamless invisible border mantra, is it not time to logically recognise that our concerns can only be definitively addressed in the context of agreement being reached on the nature of the UK’s post-Brexit trading relationship with the EU, including our State.

Upon the EU debt and citizenship issues being resolved in phase one of the talks, logic dictates that the second phase of the talks should commence led by Michel Barnier and detailed engagement on Ireland’s and the EU’s future trading relationship with the UK begin. It is in such context that arrangements special to the island of Ireland are most likely to be best and most coherently addressed. – Yours, etc,

Sir, – Should the EU find itself in the position that a “hard border” has to be established in Ireland, then the EU should supply the necessary personnel to operate and oversee this task. – Yours, etc,

Sir, – The Sun’s characteristically nasty editorial tells Leo Varadkar to “grow up” and labels him a “Brexit buffoon” “UK newspaper says ‘naive, young’ Varadkar should ‘shut gob’ on Brexit” (November 18th). It’s the kind of abusive name-calling about anything EU-related, masquerading as opinion, that is common-place in the UK’s Eurosceptic gutter press. Brendan Howlin is quite right to call it “jingoistic, ignorant, bullying” and “deliberately offensive”.

The Sun has contributed for several decades to stoking up a xenophobic atmosphere in Britain. Indeed, it helped create the unhealthy political and social environment that led to the British people foolishly voting for Brexit in the first place. – Yours, etc,

2 Vaccinated in London: I feel guilty that people I love in Ireland haven’t been inoculated