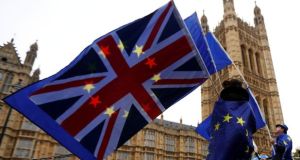 Sir, – You report that Minister for Foreign Affairs Simon Coveney has insisted that the Democratic Unionist Party could not have a veto on the Brexit talks (News, November 14th).

Arising from the decision of the UK government to introduce primary legislation to implement any agreement emerging from the talks, the DUP, while not having an absolute veto, will be in a very strong position to determine what suits them best politically and to influence a Westminster vote.

Crucially, as well as trade with the EU and other matters, this will include the issue of the Irish Border and the Belfast Agreement and the possibility of a “no deal” Brexit.

It has been the case since David Cameron announced the EU referendum in February 2016 that the UK government’s approach to Europe is based primarily on what is required to appease the various wings of the Tory party. We can now add to this what is required to keep the DUP on board.

Ireland should now concentrate all its efforts on working more closely with the EU taskforce and with our European partners in ensuring that our vital national interests are fully protected. – Yours, etc,