‘Woman in the home’ referendum 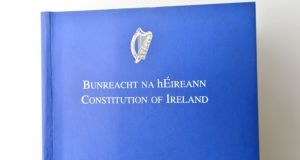 Sir, – Laura Cahillane (Opinion & Analysis, November 16th) is surely right to suggest that there should be a serious conversation about Article 41.2 of the Constitution (often referred to as “the woman in the home” clause) before the matter is brought before voters in a referendum.

It is indeed often seen as “paternalistic”, and in some respects it was: but it should also be understood within the context of the 1930s. In Britain at this time magazines like Good Housekeeping and Woman and Home were achieving huge circulation success, indicating that there was a genuine interest in valuing home-making and the home-maker. True, upper-middle-class women were – after the social changes wrought by the first World War – finding they had to do their own housework and were suddenly discovering “les arts ménagers”.

In Ireland, Arensberg & Kimbell, the American anthropologists, suggested that agricultural backgrounds often gave families a more sensitive appreciation of what women in the home contributed to the family economy. Bachelor farmers were always at a marked disadvantage.

In modern divorce cases, judges are coming to recognise that the spouse who has been the home-maker has indeed contributed to “the common good”, and, where the couple has prospered, has frequently added value, or made a meaningful contribution, to that prosperity.

In a recent biography of Sir Anthony O’Reilly, it became evident that his first wife, Susan, provided a crucial “support” to his rise as a magnate. She provided the mis en scène which allowed Tony to prosper. A spouse who has provided that key support to a successful career should not be airbrushed out of the story.

Article 41.2 is old fashioned and may need rephrasing or updating. But it would be reductionist, surely, to dismiss it entirely as merely “paternalistic” and we should ask whether deleting it would, in effect, airbrush many women (and homemakers in general) out of the narrative. – Yours, etc,