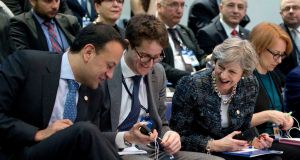 Taoiseach Leo Varadkar shows his decorative socks to British prime minister Theresa May (second right) during a round table meeting at an EU summit in Sweden on Friday. Photograph: Virginia Mayo/AP

The Sun’s UK edition has written a scathing editorial criticising Taoiseach Leo Varadkar’s “rookie diplomacy” skills and advising him to concentrate on “helping make Brexit work for millions of his citizens”.

The article was published on Saturday following Mr Varadkar’s comments after the bilateral meeting with British prime minister Theresa May at the European social summit on Saturday.

Mr Varadkar told Ms May the UK’s decision to “unilaterally” rule out important options in the Brexit talks has prompted Ireland and the EU to set their own non-negotiable red lines,

“Before we move to phase two talks on trade, we want taken off the table any suggestion that there will be a physical border, a hard border, new barriers to trade on the island of Ireland,” he said.

There was praise and criticism for the Taoiseach’s comments.

Some of the fiercest criticism came from The Sun. The newspaper began its editorial calling Mr Varadkar a “Brexit buffoon”.

“The Sun has some advice for Ireland’s naive young prime minister: shut your gob and grow up.

“He is too busy disrespecting 17.4million voters of a country whose billions stopped Ireland going bust as recently as 2010.”

The article said much of Ireland’s economy depended on the UK - it’ largest trading partner and closest neighbour.

“The effects of a 'hard Brexit' could be catastrophic,” it said.

“Yet Varadkar’s rookie diplomacy, puerile insults and threats to veto trade negotiations are bringing it ever closer.

“We can only assume his arrogance stems from a delusion that he can ­single-handedly stop Brexit.”

The editorial finishes describing Mr Varadkar, who is 38-years-old, as “a man increasingly out of his depth”.

Labour party leader Brendan Howlin has come to the defence of Mr Varadkar describing the editorial as “jingoistic, ignorant, bullying and ageist”.

“(The) tone of this editorial is deliberately offensive and will contribute nothing to resolving the issues our countries face,” he said.

“It reverts to the bad old days when the UK thought it could tell Ireland what to do, a view no longer held by the vast majority of the British people.”

Mr Howlin said Mr Varadkar had the support of all Irish people as he represented the interests of Irish citizens and many UK citizens living in Northern Ireland.

The editorial does not appear in the newspaper’s Irish edition.