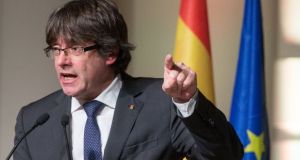 Sir, – Paddy Woodworth’s article “Polarised dogmas hinder resolution of Catalan conflict” (Opinion & Analysis, Online, November 20th) offers no solution to the very real problem that – like it or not – there is no scope currently within the Spanish constitution for a region to legally cede from the rest of the state. To consistently point this out is not intransigence on the part of the Spanish government.

It is also needs to be acknowledged that while the Spanish courts can be very restrictive in terms of bail, those with whom the judges have been most severe have been members of Spanish prime minister Mariano Rajoy’s own party; a significant number are still in prison awaiting trial on corruption charges.

In that sense the law is being applied fairly, although that’s not how it is seen in Catalonia, where there is a strong sense of being humiliated. The latter view is not shared in the rest of the country where – with the except of some in the Basque Country – people feel that the Catalan nationalists have knowingly, and quite flagrantly, broken the law but somehow believe that it should not apply to them in the same way as others.

There is a proposal from the Socialist Party for a committee to review the constitution, something which the government has said it is open to. Any vote on constitutional change would, of course, involve the whole country and not just Catalonia. The 1978 constitution has served Spain well, given that it was forged after 40 years of dictatorship but, like all such legal tracts, it needs reform from time to time. So far, the Catalan nationists have ruled out taking part in any such review. – Yours, etc,