Cliff Taylor: Whatever happens we have seen the best of the bounce-back boom 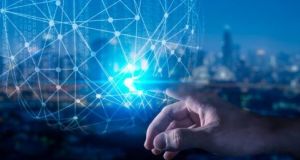 The big tech firms continue to drive demand for new office space, and the Dublin crane count remains high. In fact, while the whole economy would take a hit from a no-deal Brexit, Dublin would have a lot of insulation. It is rural Ireland which stands exposed

Big parts of our economy are now in a kind of suspended animation, waiting for the outcome of the Brexit talks. In the domestic economy – the bit of our economy most exposed to Brexit madness – investment and hiring in many areas has almost ground to a halt, according to many sources. People running businesses are increasingly distracted, trying to prepare for the unknown.

We will remain stuck in this moment unless some way forward on Brexit materialises, as everyone’s time and energy is diverted.

This week’s events – by making a no-deal exit at the end of March less likely – will help a little. But until the UK and EU agree a way forward which both sides can accept, the uncertainty will just roll on.

There is a lot of talk in the UK about “taking a no-deal off the table”. But UK politics cannot do that unilaterally, and finding a way through this mess remains challenging.

The unique structure of the Irish economy means we need to interpret what is going on with care. We now effectively have three economic cycles to try to keep an eye on, Ibec’s chief executive Danny McCoy said in a speech this week.

One is the domestic economy – SMEs, food businesses, construction, consumers and large parts of the services sector.

The second is the bigger goods exporters, both foreign-owned and Irish.

The third cycle is the big tech players, Apple, Google, Facebook, LinkedIn and the rest, who operate to their own economic cycle, restructure constantly – most recently to Ireland’s advantage – and are key players in the big jump in Irish corporate tax revenues.

These three bits of the economy are linked together. But the strong growth in exports and in the big tech players hides less buoyant activity and a much greater exposure to Brexit elsewhere.

If you are a Facebook or a Google or another big player down in Dublin’s digital docks, a no-deal Brexit is a bit of a nuisance. If you are an Irish beef exporter it is a question of life or death.

The different cycles may give us some protection. For example, the surge in corporation tax in recent years is partly the result of general economic buoyancy but is also inextricably linked to tax planning by big tech players who have moved a lot of their key copyrights, patents and trademarks – intellectual property, in the jargon – to Ireland.

In tandem with this, and to satisfy international rules requiring profits in this area to be matched by real business activity, the companies involved have located more of their operations here. This means more profits – and more tax.

Likewise, the big tech firms and other exporters continue to drive demand for new office space, and the Dublin crane count remains high. In fact, while the whole economy would take a hit from a no-deal Brexit, Dublin would have a lot of insulation. It is rural Ireland which stands exposed.

The evidence of the slowdown in the domestic part of the economy is hard to unearth, precisely because the overall data is dominated by the big players. Yet there are signs in the data and clear evidence talking to people running companies and their advisers.

The domestic sector is a big employer, and the growth in job numbers slowed sharply through last year. Quarterly growth in total employment fell to 8,300 in the fourth quarter of last year, from an – admittedly exception – 26,200 in the same period of 2017. In multinational-land we have job shortages, but in much of the domestic economy hiring has stalled.

SME investment is also on the decline, with Central Bank data showing a falloff in 2018, and business groups like Ibec reporting a definite softening since. Companies are “waiting and seeing”. In the food sector, for example, the giants with an international footprint like Glanbia and Kerry have the scale to keep on expanding, but smaller players, afraid of a big Brexit hit to cashflow, are sitting on their hands.

Many have also had to put in place costly measures to guard against Brexit risk, for example building up stocks either here or in the UK.

The latest AIB survey of Irish industry showed the rise in stock during February was at the highest level in the 21 years of the survey, driven in part by pre-Brexit moves. Again, this kind of investment can be absorbed by big players, but is a real hit to SMEs.

Meanwhile the consumer mood is also nervous, with a fall in car sales and sentiment starting to suffer.

There is also a wider context here. Irish economic growth has been extraordinary over recent years. Against a backdrop of a slowing international economy and fears of trade wars – and running up against job and housing shortages – some slowdown in growth was always likely. Even if the immediate Brexit threat is removed, this remains the case.

We have seen the best of the bounce-back boom even if we can still hope, Brexit-permitting, for – whisper the phrase gently – a soft landing.

A no-deal exit means a big hit to growth, possibly 4 per cent of GDP in the first year, according to the Central Bank. If that is avoided we enter the transition period, and not much will change until the end of 2020, at least.

This will still mean difficult decisions on the future of trade. But in the short-term we might well see some kind of a relief recovery in the domestic economy as companies and consumers push ahead with plans that had been put on hold.

For the big tech and pharma exporters life will continue on much the same. But for the domestic economy the stakes could hardly be higher.

1 Covid-19: Cabinet looks to tighten travel restrictions and decide on pubs reopening
2 Dún Laoghaire home of renowned acting mentor Betty Ann Norton for €1.5m
3 David Trimble: After the big dinner in Oslo, somebody said why don’t we party together?
4 Vicky Phelan: ‘I hated being a mother – I would have gladly walked away from it’
5 Five Covid-19 clusters found among Irish fruit and vegetable growers
Real news has value SUBSCRIBE