British prime minister Theresa May has promised to give MPs a vote on extending Brexit negotiations or withdrawing from the EU without a deal if her plan is rejected next month. 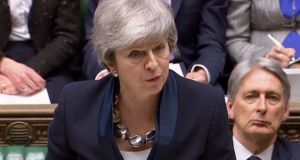 Theresa May makes a statement to the House of Commons in London on Brexit on Tuesday. Photograph: Getty Images

British prime minister Theresa May has promised to give MPs a vote on extending Brexit negotiations or withdrawing from the EU without a deal if her plan is rejected next month.

In a dramatic statement to the House of Commons, Mrs May confirmed that she will put her withdrawal agreement — including whatever additional assurances she has secured from Brussels — to a “meaningful vote” by March 12th.

If that fails, MPs will be offered two separate votes the following day — one on a no-deal Brexit, and the other on requesting an extension to the two-year Article 50 negotiation process to delay EU withdrawal beyond March 29th.

“The United Kingdom will only leave without a deal on 29 March if there is explicit consent in the House for that outcome,” Mrs May told parliament. “An extension cannot take no deal off the table.”

The sequence of votes will be proposed in an amendable motion tabled by the prime minister for debate and vote in the Commons on Wednesday.

To uproar in the Commons, Mrs May told MPs: “They are commitments I am making as prime minister and I will stick by them, as I have previous commitments to make statements and table amendable motions by specific dates.”

DUP MP Jeffrey Donaldson said he believes that a deal will be reached between the UK and the EU at the last minute.

“My experience of negotiations is that these things often go down to the wire,” he told RTE’s News at One. “I believe there’s still time to secure changes to enable parliament to sign the withdrawal agreement.”

Mrs May said the Government was publishing a paper assessing its readiness for a no-deal Brexit and the “very serious challenges” it would pose.

“I believe that if we have to, we will ultimately make a success of a no-deal,” she said.

“But this paper provides an honest assessment of the very serious challenges it would bring in the short-term and further reinforces why the best way for this House to honour the referendum result is to leave with a deal.”

Mrs May said the government must honour Britain’s decision to leave the European Union. “This House voted to trigger Article 50 and this House has a responsibility to deliver on the result – the very credibility of our democracy is at stake,” she told parliament.

Labour leader Jeremy Corbyn said he had “lost count” of the prime minister’s explanations for her “grotesquely reckless” delays.

He said: “I have lost count of the number of times the Prime Minister has come to this House to explain a further delay.

“They say history repeats itself, first time as tragedy, second time as farce, by the umpteenth time it can only be described as grotesquely reckless.”

Mr Corbyn said Mrs May was promising to achieve “something she knows is not achievable” and her “obstinacy” was the block to a resolution.

“Will she be straight with people?” he said. “The withdrawal agreement is not being reopened, there is no attempt to get a unilateral exit on the backstop or a time limit.

“She has so far promised a vote on her deal in December, January, February and now March, and only managed to put a vote once — in January when it was comprehensively defeated.

“The prime minister continues to say it is her deal or no deal, but this House has decisively rejected her deal and has clearly rejected no deal.

“It is the prime minister’s obstinacy that is blocking a resolution.”

A delay would increase the chances of a reversal of Brexit, especially as the Labour Party is tilting towards supporting another referendum, though much would depend on the extent of the delay.

While businesses have increasingly warned of the risk of a chaotic EU exit and its impact on trade and investment, any delay would be anathema to pro-Brexit members of May’s Conservative Party.

Both of Britain’s main parties are under intense pressure to change course on Brexit, though both are officially committed to implementing the result of the referendum.