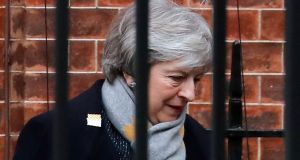 Theresa May’s hand was forced by the threat of ministerial resignations if she failed to rule out a no-deal Brexit on March 29th. Photograph: Frank Augstein

Theresa May’s promise to allow MPs to postpone Brexit rather than leave the EU without a deal has cut dramatically the chances of a no-deal Brexit on March 29th. But she has not ruled out a disorderly Brexit a few months later and the prime minister warned on Tuesday that a cliff edge at the end of June could be even more perilous.

May’s hand was forced by the threat of ministerial resignations if she failed to rule out a no-deal Brexit on March 29th and the fact that MPs were expected to pass an amendment that would have taken control of the parliamentary agenda to compel her to seek an extension to the article 50 negotiating deadline.

Her promise of separate votes on a no-deal Brexit and an article 50 extension was enough to persuade the amendment’s chief Conservative sponsor that it is no longer necessary, so Wednesday’s vote on a neutral Brexit motion is likely to pass off without difficulty for the prime minister.

Brexiteers were restrained in their response to the prime minister, urging her to continue to press the EU for changes to the Northern Ireland backstop and a promise that it can be replaced by the “alternative arrangements” proposed in the so-called Malthouse compromise.

May told MPs that any article 50 extension must be as short as possible because delaying Brexit beyond the end of June would mean that Britain would have to hold European Parliament elections in May. So if Brexiteers reject May’s Brexit deal next month, they would only have to wait for three months for the no-deal Brexit some of them wish for.

Their calculation could backfire, however, if MPs faced with the threat of a no-deal Brexit in June, without the possibility of a further article 50 extension, could vote instead for a second referendum. And the EU could allow Britain to appoint MEPs for a limited period – as Croatia did following its accession in 2013 when it selected MEPs to reflect the composition of the national parliament.

May will avoid all of these scenarios if attorney general Geoffrey Cox secures assurances on the backstop that are enough to persuade the DUP and Conservative Brexiteers to back her Brexit deal. To have any chance of success, however, the prime minister will have to move quickly to reduce the gap in expectations between Brussels and Westminster about how far these assurances can go.