France on no-deal Brexit: ‘The widespread opinion is it’s mad’

French businesses are better-prepared than the UK for crash-out, an expert believes 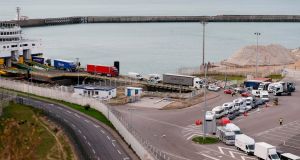 Dieppe harbour in northwest France. As Brexit approaches, the ports of the English Channel and the North Sea are preparing for the worst. Photograph: Charly Triballeau/AFP/Getty Images

Pauline Schnapper, professor of contemporary British civilisation at the Sorbonne, is quoted often in French media as a leading expert on Brexit. “I am sure of nothing – like everyone else,” Schnapper says when asked if she expects the UK to crash out of the European Union without a deal on March 29th.

“It’s totally uncertain,” Schnapper continues. “I tend to think a postponement is more likely than a no-deal Brexit. But anything could happen ... There’s a widespread opinion that the whole situation is mad and that the British don’t realise they are in a position of weakness. The prevailing idea is that the British will lose more than us, though it will cost us too. What I hear and see is that we are better-prepared than the British.”

Advisers at prime minister Édouard Philippe’s office are too diplomatic to talk of madness. “The ambience in Paris is one of concentration on preparing for a no-deal Brexit, which is the scenario we prefer to avoid,” says an aide. “The preferred scenario is ratification of the [withdrawal] treaty by the British and European parliaments ... Plan A is ratification of the withdrawal agreement. If that doesn’t work, plan B is preparation for a no-deal Brexit.”

The French finance ministry set up the website brexit.gouv.fr in December to help French businesses prepare for a no-deal Brexit. On January 19th the French parliament passed a law authorising the government to draw up ordinances preparing for the British withdrawal.

Six have been published already in the official journal, one on the rights of British citizens in France, one on building the necessary infrastructure to re-establish checks on the borders, one each on road transport and rail traffic through the Channel Tunnel and one on financial services.

“We feel better and better prepared,” says the adviser to the prime minister. “We have adopted a legal arsenal of texts and rulings. We are re-establishing a border with the UK. A no-deal Brexit means you have to control the frontier.”

The French ordinances seek to maintain as much continuity as possible for 200,000 British citizens in France and for 300,000 French citizens in Britain. They provide for recognition of professional qualifications and rights to social services, on the basis of reciprocity. But these are temporary measures, until more permanent bilateral accords can be negotiated.

“The purpose of the [French] law is not to give the UK the status of an EU member state through bilateral means,” the adviser to the prime minister stresses. “It doesn’t mean cutting and pasting rules from the EU treaty. We cannot give them through bilateral means the rights they had before they decided to leave the union.”

The vast majority of French businesses nonetheless “regret” Brexit. “They all cling to the hope that there will be an agreement to avoid a hard Brexit,” De Menthon says. “They have the feeling it’s in the hands of the English, and that Europe can do nothing. It is completely the responsibility of the English. Businesses don’t expect anything of the French government.”

De Menthon has surveyed Ethic’s member companies regarding Brexit. “They are very concerned about competition after Brexit. They fear the British will engage in unfair competition, through social and fiscal dumping,” she says. They also worry about having to pay customs on imports from and exports to Britain, and interruptions in their supply chains.

A source at the French finance ministry told De Menthon that 30 per cent of the French working in London intended to return to France.  The government foresees new means for prefectures in southwest and southeastern France and the Paris region, where most Britons live, to provide residence cards and drivers’ licenses in the months following Brexit.

Whaller, a French social network company based in the UK, will move to France because its British internet service provider will no longer be bound by the EU’s data protection rules.

The French cosmetics sector, which enjoys an €800 million annual trade surplus with the UK, fears divergent regulations and demands for different packaging in the UK. De Menthon says Eurotunnel, the partly French company that manages the tunnel (but not the trains) beneath the Channel, has been asked to adapt to “unimaginable EU administrative rules” and that “French rules go even further. They’re bogged down in who keeps what, what checks are done where and by whom, what changes in the tunnel … ”

With the March 29th deadline looming, analysts are beginning to weigh profit and loss. “I think France has the idea that her influence could be greater within the EU without the UK, but I’m not sure that will be the case,” says Schnapper. “And Paris hopes that banks and institutions will relocate from the City of London. So far there hasn’t been massive movement.”

“We lose a major partner within the EU, who we will miss in important debates on defence, development policy, the climate and energy,” says the prime minister’s adviser. “We may gain in cohesion on questions concerning the euro, on financial questions. But we don’t have the hindsight to know yet.”