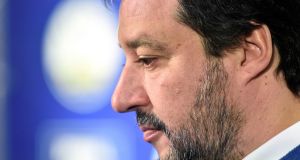 The Italian coalition which took office in 2018, bringing together Luigi Di Maio’s populist Five Star Movement (M5S) and Matteo Salvini’s far-right Lega, came to a premature end last August when Salvini, following tensions with his partners, collapsed his own government and called for new elections. His gambit misfired on that occasion when M5S negotiated a new coalition with the centre-left Democratic Party (PD), leaving him out in the cold.

Though out of office, the Lega remains by some distance Italy’s most popular party and is impatient to get back into power, particularly as the current coalition remains unstable, with M5S continuing to haemorrhage public support. An opportunity seemed to present itself to the Lega with last weekend’s regional elections in Emilia-Romagna and Calabria.

The Sardines highlight Salvini’s weakness for flamboyant verbal violence, which they see as likely to ultimately lead to physical violence

Emilia-Romagna, a longtime stronghold of the left, was a particularly tempting target for Salvini: a breakthrough there might well have led to the government’s collapse and new elections. Opinion polls were encouraging for the Lega, which appeared to be closing the gap.

In the event, Sunday’s poll saw the re-election, by a margin of eight points, of the region’s outgoing governor, Stefano Bonaccini of the Democratic Party. This decisive result was achieved by a vigorous campaign which succeeded in doubling turnout to 68 per cent.

It was boosted by the entry of a new political actor, the leftish but non-party “Sardines” movement, a loose organisation of mostly young people whose name derives from their tactic of packing out their cities’ piazzas to demonstrate against the populist, nationalist and anti-immigrant policies of the Lega. In particular the Sardines highlight Salvini’s weakness for flamboyant verbal violence, which they see as likely to ultimately lead to physical violence.

For the moment the challenge of the Lega has been headed off. In the longer term, however, those who wish to keep the extreme right out of power in Italy will need all the energy, discipline and imagination they can muster. For we can be sure that Matteo Salvini has not gone away.