Transcript of speakers at ‘up the Ra’ Sinn Féin event: ‘We broke the Free State’

David Cullinane apologises for comment in victory speech: ‘I don’t set out to offend anybody’ 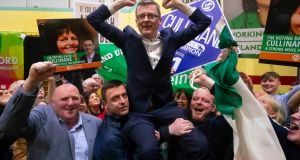 Sinn Féin TD David Cullinane has apologised for saying “up the Ra” at a victory speech in Waterford on Sunday.

In his address to party members on Sunday night, Mr Cullinane recalled encounters with supporters of Fianna Fáil who, he said, encouraged him to leave Sinn Féin to further his political career.

Mr Cullinane topped the poll in Waterford in Election 2020 with more than 20,000 first preferences.

Mr Cullinane also reflected on how some of his supporters in the room had canvassed for hunger striker Kevin Lynch when he stood in the constituency in 1981.

Asked on Tuesday by local radio station WLR if he was sorry for the comment, Mr Cullinane replied: “Yes, of course I am, because I don’t set out to offend anybody”.

He said there was a “lesson for everybody not to be giving speeches at two o’clock in the morning and letting yourself be carried away in terms of the euphoria of winning over 20,000 votes in Waterford, but he has apologised and I think it was the right thing to do.”

On Monday party leader Mary Lou McDonald said the controversy was a distraction from the process of forming a government and urged her TDs not to make comments that distracted from the party’s agenda.

Below is the full transcript of Mr Cullinane’s speech on the pub which was preceded by comments from his election agent, Michael Doyle at the event on Sunday evening.

Mr Cullinane was introduced by Mr Doyle (35), a well-known member of the party in Waterford. Mr Doyle has campaigned locally on disability and transport issues, and stood unsuccessfully in last year’s local elections.

He has worked for Sinn Féin in the Seanad, the European Parliament and for former TD Caoimhghín Ó Caoláin in the previous Dáil.

David Cullinane’s election agent, Michael Doyle: “To be honest I don’t know what I’m going to say here tonight because I’m still in shock myself. This country has changed, there’s something serious after happening.

“There’s a seismic shift and the Shinners are at the f**king table. The ‘big two’, as they call themselves, say they’re not going to talk to us. Well, do you know what? We broke the bastards.

“We broke the Free State and this country will never be the same again - because the people are after taking their voice and it’s up to us now to deliver.

“We topped boxes from Clashmore to Cheekpoint, and there’s a group of them over there tonight - thanks for coming.

“But that voice now needs to be delivered, and we have a man here that is after getting an unbelievable mandate to go up and deliver for Waterford.

“That man (referencing Cullinan) and we said he is the strongest voice in Waterford but more so than anything, he’s Waterford’s champion.

Give him a round of applause, he’s David Cullinane.

“We don’t take this for granted because this is serious now. Votes are votes but we’re going in there to deliver.

“And those two that are sitting at the table, they will talk to us because people have given us the voice to bring up there and we are going to take over. The future is ours, the future is a united Ireland. David Cullinane Abú.”

David Cullinane takes to the stage.

David Cullinane: “I think we might get Michael up for a few songs in a few minutes. [LAUGHTER].

“I first of all just want to start by thanking Michael who back four and a half years was the director of elections for Sinn Féin here in Waterford at the 2016 general election.

“Here we are just over four years later and I don’t think anyone could have predicted the vote that we got here today.

“Just to let it sink in for a second; Sinn Féin in Waterford got more first preference votes than the two Fianna Fáil and the two Fine Gael candidates combined.

“Let it sink in that Sinn Féin is now the largest party by a country mile here in the county of the Déise.

“Before I was first elected as a councillor I remember I bumped into a group of businessmen here in Waterford that I know support Fianna Fáil.

“And I remember back through the years when Fianna Fáil was the party of the brown envelope and the corruption, and they were in the pockets of the developers and the speculators, and those people said to me in a pub in Waterford back then that I’ll never be elected as a councillor if I stayed with Sinn Féin - and in 2004 I was elected as a councillor for Sinn Féin.

“They also told me I would never make it as a TD with Sinn Féin - and I was elected as a TD last time around.

“The same people told me I’d never be a minister with Sinn Féin - so now we can write the history books on that one. [Applause and cheers]

“The only way that cannot happen is if FF and FG come together and form a coalition to block Sinn Féin, and if they do, comrades, we stand two candidates here in Waterford the next time and we’ll take two seats and we will throw Fianna Fáil and Fine Gael out and we will be the largest party in this State. [CHEERS]

“I want to finish with this because we are united Irelanders and I was...I was too young to remember it but I heard of people in this room who canvassed for Kevin Lynch back in 1981, one of the hunger strikers.

“When he first embarked on a hunger strike with Bobby Sands and all of those comrades, he was the H Block candidate here in this constituency.

“And what a fantastic moment it must be if his family are watching on and people in the North are watching on to see Sinn Féin get over 20,000 first preference votes in the constituency. [INAUDIBLE]

“And what we say is, up the Republic, up the Ra and tiocfaidh ár lá.”