Kathy Sheridan: Beware the backlash to the Weinstein scandal

As usual, the focus is already shifting from the accused to the behaviour of his accusers 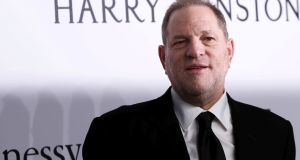 Harvey Weinstein has denied having non-consensual sex with anyone. File photograph: Andrew Kelly/Reuters

The speed at which the ennui descends is the killer. It is almost as if the spectacle of a Harvey Weinstein flying off to “sex addiction” rehab in Arizona, or a Trump slouching towards the Oval Office, renders it too damn complicated for the average brain. And as usual, laydeez, you’ve gone too far. You clearly haven’t been listening to Woody Allen: “You don’t want it to lead to a witch hunt atmosphere, a Salem atmosphere, where every guy in an office who winks at a woman is suddenly having to call a lawyer to defend himself. That’s not right either.”

Got that? Everyone knows that a guy winking at a female colleague is exactly comparable to the boss lumbering about the workplace in his dressing-gown demanding a “massage” or grabbing women by the pussy. And have a thought for the poor lads of Salem back in the day.

What kind of female, bound hand and foot, weighed down with a rock and dunked under water, insists on staying afloat knowing survival will only prove she is indeed a witch? Damn women ... never know when to stop, just whining on and on and on even if it kills them.

So the game moves on and the old perp is reduced to a bit actor in the briefly more thrilling game of Who Knew? Excellent diversion. And suddenly, when people are beginning to think that sexual harassment might just be systemic, the US rightwing media (and some nearer home) make it all about Hillary.

Hillary, who had the effrontery to write a book about her own election campaign despite being told relentlessly to shut up, you lost, move on, suddenly faces demands to speak now, because ... Weinstein contributed $26,000 to her campaigns (not $250,000 as reported) and because she stayed married to winking Bill. Ah, so Hillary is responsible for Harvey Weinstein. She’s still afloat, furthermore, still talking. Must be a witch.

No wonder we have all those guys and gals out there professing to be terrified of saying anything “politically incorrect” for fear of drawing covens of scary feminists upon themselves. And yet they say it. One female, British TV presenter tweeted: “If I were a Hollywood starlet and I didn’t have my own sordid story to tell about Harvey Weinstein, I’d probably make one up now.” Nudge, nudge, they’re all lying and if they’re not, what took those ambitious young actresses to an influential Hollywood producer’s hotel room, anyway?

Most journalists have conducted interviews in hotel rooms. This week, one painstakingly explained the difference between the average perception of a “hotel room” (two beds, a TV, a desk and chair, a sleazy type opening the door), and the kind of royal suite – conference rooms, vast dining area, sittingroom, multiple bathrooms and bedrooms – reserved for a Weinstein, a former president or VIP.

In the case of say, a Bill Clinton touting a book, it may be a suite in the London Ritz, with security on the hotel floor and outside the door, plus PAs, aides and publicists making themselves conspicuous inside, offering water while ostentatiously placing their own recording device beside yours on the table. How would you react in the moment if everyone around your powerful, sought-after interviewee/interviewer suddenly scattered? Rejoice that the powerful one was now free to speak freely – or suspect that something wasn’t quite right?

For many listeners to the audio of Weinstein attempting to bully a woman into his hotel room – obtained during a police sting – there is something eerily familiar about the swing between roaring and shaming, the play on a woman’s instinct to please by accusing her of embarrassing him in public because she was failing to do as she was told.

There is no mystery.

Stripped of the Hollywood trappings, the Weinstein modus operandi could be a microcosm of all the betrayals, cover-ups and droits de seigneur visited upon women across the ages. The #metoo hashtag, set up last Sunday by Alyssa Milano, for people who have been sexually harassed or assaulted gives an idea of staggering numbers. Are they all fantasists?

Who still believes “grab them by the pussy” can be dismissed as “locker room talk”? Why, even in a buffoonish boast, would a man’s stated pleasure consist of inflicting shock, physical pain and profound humiliation on random women? Why would other men find it funny? Have a trawl through the “Escort Ireland” website (which operates out of Spain) or any “escort” website and see how punters grade the women they rent for sex.

Then ask yourself again why so many women truly believe that so many men despise them.

1 Restarting Ireland: When and how will we ‘get back to normal’?
2 What is Houseparty, the app everyone’s talking about – and not in a good way?
3 Tuberculosis vaccine ‘potential game-changer’ in Covid-19 fight
4 Mary Lou McDonald: This crisis shows that Sinn Féin was right
5 Coronavirus lockdown steps could remain into winter, says expert
Real news has value SUBSCRIBE