Kathy Sheridan: ‘Elderly’ is just a word – sometimes the wrong one

If age is only a number, when is it okay to use that culturally loaded term ‘old’? 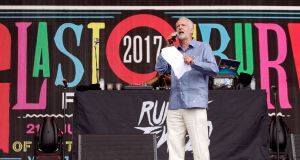 The Guardian once carried a report on the rescue of a couple of transatlantic sailors, aged 64 and 68, beginning as follows: “Most retired people are content to fill their days doting on grandchildren, creating their ideal garden, and taking relaxing holidays . . .” To which an indignant reader responded: “If the couple had been under 25, would the lead have been ‘Most young people are content to fill their days drinking themselves senseless, watching crap TV, and shagging as much as possible . . .’?”

The story came to mind when a gerontology specialist took issue recently in his Irish Times column with the tolerance of casual ageism. “While huge sensitivity is taken with terminology relating to race and gender preference, it remains open season for attitudes and descriptors related to ageing,” wrote Prof Des O’Neill. When he suggested “an absolute ban on the word ‘elderly’”, ears shot up.

But the word “elderly” is a factual description and makes no judgment, protested Sean O’Sullivan in the Irish Times Letters page. “If it is somehow improper to describe an old person as old, senior or elderly, will the word police next prevent us from referring to our offspring as children?”

“Elderly” might well be a factual description. But of whom exactly and in whose common usage? Google the word and the first three suggested results are “elderly care”, “elderly abuse” and “elderly mobility scale”. Helpful dictionary examples of the word include: “An elderly man from Hull has confounded doctors by recovering after he was officially declared dead.”

Last year, in a piece about former Maynooth seminarians who were marking 50 years since graduation, I used “elderly” as a kind of shorthand to describe a group of men aged around 71. The article caused heavy ripples within the group since they had all abandoned the seminary with varying degrees of reconciliation, affection, pugnacity and hostility, but the most unexpected reaction was from one who reported that some were “aghast” at my use of the word elderly.

“That word suggested a high level of frailty,” he said. “Maybe after 80 it might be okay, but I’ve been telling my kids until recently that I consider myself to be in late middle age. I’m not ready at all yet to admit I’m in old age.” Indeed, their group includes a good few high-flying academics and businessmen.

The Maynooth men are only three years older than 68-year-old British Labour party leader, Jeremy Corbyn, who conquered Glastonbury over the weekend. David Davis, the Tory minister who, for good or ill has the mighty job at 68 of directing Brexit negotiations for the UK, also happens to be a fitness fanatic, who “cannot see a sharp incline without ascending it”, according to one columnist. “I would like to watch some of his younger critics keep up with him on a fell walk.”

Still, who cares? What does language matter anyway? It matters, says one of my Maynooth interviewees, “as it is the main carrier of memes – shorthand prescriptions that can be transmitted, stored and mutated in a society, not necessarily through conscious uptake. Stereotypes about ‘the elderly’ would be a good example of a strong meme, spreading like a virus without notice in Irish society. I’m told there is no such meme in Chinese culture, because of different attitudes to ageing”.

It seems trite to say that we live in a changed world, but it’s a fact. Fifty years ago, it might have been factual to describe a 65-year-old as “elderly” but in 2017, it’s not even safe to assume that a 65-year-old is a pensioner (yet another handy piece of media shorthand). And age is clearly no predictor of performance or creativity. Look at the late plays and poetry of WB Yeats and Samuel Beckett. Look at Frank Lloyd Wright who, as O’Neill is fond of pointing out, designed New York’s Guggenheim Museum in his 70s. Yet statistical polling companies still commonly and nonsensically uses a bundled age cohort of 60-plus. But “plus” how many years? Is it 15, 25, or even 30? Imagine the response if they bundled everyone aged 15 in with say, 35-year-olds?

We are not all the same. Obviously. Individuals age differently. When asked in surveys at what age they thought they might be old, most over-50s said not until they reached their 80s – if at all. Life is changing, but attitudes and social norms lag far behind.

This goes way beyond vanity, touchiness, or political correctness. Ask anyone in their 50s who has tried to get a job. Ask people in their 60s who desperately need to continue in paid employment because their “gold-plated” pensions have gone up in smoke or because their offsprings’ bank guarantees have come back to bite them.

Language matters. Some day that “elderly” person will be you.

1 Officials refuse to rule out ‘Midlands lockdown’ following Covid-19 surge
2 Masks Q&A: Who has to wear them in shops and what happens if you don’t?
3 How a ship abandoned by its owner brought deadly cargo to Beirut
4 Reopening of schools in many EU countries has not led to Covid-19 increase, ECDE report finds
5 Scarlet for ya: Paul Mescal does classic Connell in The Rolling Stones’ new video
Real news has value SUBSCRIBE