People and not laws bring human rights to a country 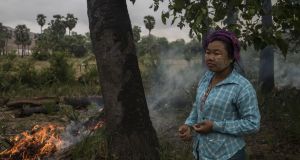 Thwe Thwe Win working on her land near the copper mine in Myanmar. 25 May 2016. Photo: Lauren DeCicca / Front Line Defenders

Thwe Thwe Win took a six hour car ride through rural Myanmar before boarding her first of three flights to Dublin this weekend. Badie Dwaik never expected to be allowed out of Gaza at all, so the hour-long detention in Paris en route to Ireland hardly phased him. There are no civilian flights in or out of Timbuktu, and main road to the capital is controlled by militants, so Fatouma Harber took a small boat from the remote Malian city to reach the capital before flying on to Europe.

Thwe Thwe, Badie, and Fatouma all landed at Dublin Airport on Monday, speaking exactly zero languages in common, nodding politely at one another as they waited to be picked up. They are three of the 117 at-risk activists we invited to the 2017 Dublin Platform for Human Rights Defenders who actually made it here.

Like thousands of people trying to get into Ireland on Monday, dozens of our international guests had flights canceled or postponed. Another 11, however, were prevented from attending long before Ophelia hit, banned from leaving home by their governments.

Front Line Defenders puts on this gathering of global activists every two years. Human rights defenders from more than 80 countries flood Dublin Castle for three days of digital security clinics, panels on peaceful organising, and regional working groups to analyse the latest threats to activists in Asia, Africa, the Middle East, Europe, and the Americas.

It is an opportunity for defenders typically preoccupied with defending their communities - and surviving the threats that ensure - to spend 72 hours not being physically surveilled by a totalitarian state, threatened at work by an extremist group, or receiving menacing phone calls demanding their stop their activism. It is an opportunity to relax, something activists tend to forget to do.

It is also a chance for defenders to learn from their peers around the world. Feminists from Nigeria strategise with Colombians about how to peacefully defend indigenous land from paramilitaries. Emirati human rights defenders chat to Moroccans about the high-tech spying software both their governments recently purchased. Bahrainis lament with Bangladeshis the unrelenting influence of Saudi Arabia in each oppressive state’s policies. Rights activists from most of the former Soviet block tend to tease the Russian about their own governments’ adopting a “copy and paste” approach to many of Russia’s anti-NGO laws.

This year there will be a noticeable gap in our Dublin Castle crowd. Last week, we learned that our Kuwaiti invitee was threatened by state officials not to travel. The Bahraini invited is currently in detention; last time she was there, they sexually assaulted her. The second young Bahraini woman we invited in her place - who boldly took to Twitter to speak out for the former - now has a travel ban.

The Saudi activist learned he was on an intelligence surveillance list last week; he rang our Blackrock office to say he was too scared to leave home. The Gulf has been a blackhole of restrictions of freedom of movement for human rights defenders for some time now, but unfortunately that’s not the end of it. Our Syrian colleague has had his passport confiscated by state security in Turkey, and a Ukrainian lawyer has yet to be granted permission to travel.

An activist in Cameroon was arrested for his peaceful activism a few weeks ago - he won’t be joining us this week; he’s in prison. A Cuban human rights defender planned to leave home in Guantanamo City extra early, knowing he’d be stopped at the town’s many American-run military checkpoints - security in Guantanamo is tight. Ultimately, he was never granted the “exit permit” required to leave Cuba. In Colombia, David Rabelo Crespo was recently released from prison after 7 years for a crime he did not commit, but has still been forbidden from travel to Dublin.

Governments world-over know that it is not laws, conventions, or UN resolutions that bring human rights reform to a country - it’s people. They know that activists are only as powerful as their communities, both local and international, and are working harder than ever to ensure that networks of solidarity cannot flourish.

Radical social change - the kind that undermines dictatorships, dismembers racist populist tides, secures indigenous peoples’ rights to their land - has always been born out of collective struggle. It is clear that in preventing our human rights defender colleagues from Bahrain, Kuwait, Colombia, Saudi Arabia, Cameroon, Syria, and Bolivia from traveling, the respective authorities are not only vindictive, they are terrified of activists. Authoritarians think that if they lock human rights defenders away - behind bars or travel bans or physical attacks - that we will stop listening, that we will forget them. Authoritarians are wrong.

When governments work hard to silence activists, we must work harder to hear them. The European Union has guidelines committing it to the protection of human rights defenders for precisely this reason, to remind EU member states that keeping activists alive, out of prison, and free from persecution is our collective responsibility.

We will not speak for Ebtisam, Zainab, Hadeel, Ali, Maheir, or David, but we will demand they be freed from the dangers of speaking for themselves. Now more than ever, the EU and its member states must reiterate their stated commitment to protect the right to peacefully resist oppression and call for an end to the restrictions governments place on those who do.

This week, 106 of the world’s most persecuted activists gather under one Dublin roof, and stand in solidarity with those kept away.