Jonathan Irishtown Seagull – A Fable (with apologies to Richard Bach) 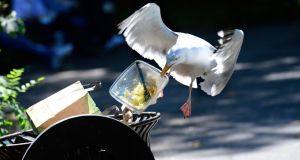 A newer, brasher breed of seagull – “gulliers” – who preferred hanging around the city. Photograph: Cyril Byrne

It was morning in Dublin, and the new sun sparkled gold across the ripples of a gentle sea. A mile from shore, a fishing boat chugged towards Howth. As the word for “breakfast” spread in its wake, a thousand seagulls descended to fight for food. Another hectic day had begun.

But nearby, alone and oblivious, Jonathan Irishtown Seagull was busy practising.  He had already spent an hour doing figures of eight around the Poolbeg Chimneys. Now he was attempting a difficult “dive, pull-up, and rolling loop” he had once seen a performing hawk do at a show in Bray.

“Ha Ha – serves ye right, ye bollix!” sneered Jimmy Ringsend Seagull, better known as “Joxer”, who was chewing a piece of haddock on a wall. It was uncanny. Joxer always seemed to be there when Jonathan crashed, and always took pleasure in it.

Raw fish is OK for breakfast, maybe, but ye can’t beat a bit of battered cod

Later, as she nursed him, Jonathan’s mother gave out too. “Why, Jonathan? Why can’t you be like other seagulls? Leave that fancy flying to show-birds and concentrate on eating, like everyone else.  You’re skin and bone.”

But Jonathan wasn’t listening. He was watching a caterpillar on a leaf and remembering aloud something a guru seagull had once said on a ferry to Holyhead: “What the caterpillar calls the end of the world, the master calls a butterfly”.

It was lunchtime now. The older birds were going to sea again. But Joxer scoffed: “Feck that for a game of soldiers.  Raw fish is OK for breakfast, maybe, but ye can’t beat a bit of battered cod. Me and the lads are heading into town to mug some tourists. If we’re lucky, we’ll get chips as well.”

Despite his indifference to food, Jonathan had noticed a growing gulf between the elders, who lived off fishing as their ancestors always had, and a newer, brasher breed of seagull – “gulliers” – who preferred hanging around the city. They found easy pickings there in what humans left behind.

But increasingly, they didn’t wait for it to be left. In the same way Jonathan delighted in flight, gulliers revelled in food robbery, with occasional assault.

Joxer bragged about it.  His favourite story involved a type of human known as “politician”, who was having lunch on Leinster House Lawn one day, when the gull swooped and stole his burrito. The politician had hurled expletives after him. So as Joxer said: “I doubled back and crapped on his suit!”

They would push humans too far one of these days, Jonathan feared. When Joxer asked “Are you coming with us, weirdo?” he interrupted his meditation to make the usual excuses. “I’ll pick up something from a trawler later,” he said.

Evening fell over Dublin.  Wednesday evening, when humans put out their rubbish bags: the ones with organic waste. These were doubly popular with gulliers, offering both food and – in Joxer’s words – a chance to “wreck the gaff”, scattering refuse everywhere.

Sure enough, as Jonathan practised self-improvement over Merrion Square, he saw Joxer below, eye-balling a human who was shooing him away from a half-scattered bag. It was a tense stand-off. “That’s my bag, pal!” Joxer was saying; “Keep walking if ye know what’s good for ye.”

High above them, Jonathan began diving from an altitude never previously attempted.  And as he plunged at terrifying speed, he suddenly felt himself at one with the universe. Indifferent to his fate, he was able to pull out of the dive only inches from the ground and land with ease. It was a paradox. In touching down, he had reached a higher plane.

At that moment, unfortunately, a resident of the square was aiming a shotgun out his window. “Take that, you bastard seagull,” he shouted at Joxer. But a split-second earlier, Joxer had ducked, to peck at a succulent, half-rotten batter-burger. So the shot hit Jonathan instead, obliterating him in an explosion of feathers.

“Ah Jayzus,” muttered a passing woman. And even Joxer was shocked, dropping his burger briefly. Then he resumed eating. “Don’t worry missus,” he said. “That seagull was never right in the head.”