An ‘iconic’ Lord Edward and the resurrection of Thomas Street

An Irishman’s Diary takes a sideways look at 1798 commemorations 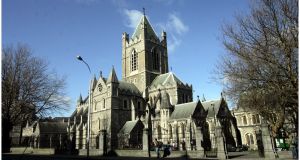 The sign over Dublin’s Lord Edward Pub (a fine old establishment itself, by the way), opposite Christchurch, is considered by Paddy Cullivan considered to be a crime against art. Photograph: Bryan O’Brien

Soon after dispatching the next day’s Irishman’s Diary – which complained about rampant overuse of the word “iconic” in the corporate world and elsewhere – on Wednesday, I had to attend a show in Dublin city centre.

En route, walking through the Liberties, I marvelled at the resurrection of Thomas Street, until recently in a dire state but now the scene of almost weekly openings, of new shops, cafes, student accommodation, etc.

The latest example was the landmark building formerly occupied by the Irish Agricultural Wholesale Society, and before that, as a wall plaque says, by an on-the-run Lord Edward Fitzgerald, who was arrested there in 1798 en route to republican martyrdom.

Now it too was getting a new lease of life, as “The Masonry”: comprising office space, a cafe/restaurant, and “internal heated courtyards”. This was cheering news. So much so that, while Googling it, I was slightly less annoyed than usual to read that company responsible is called – what else? – “Iconic Offices”.

Oh well. On I went, into town, to Napper Tandy’s pub on Merrion Row, for a “dinner show” themed (like the pub) on the 1798 Rebellion.

I wasn’t having dinner myself – only a quiet pint at the bar. Which may be just as well, because as the evening’s host Paddy Cullivan (best known as the front man on The Late Late Show house band) was first to acknowledge, some details of the 1798 rebellion could put you off your food.

But it was a thought-provoking night. And the aforementioned Lord Edward featured prominently, not least via his extraordinary relationship with Tony Small, a runaway black slave who saved his life during the American wars and who Fitzgerald then befriended and brought to Dublin.

An amusing subtheme of the evening comprised the shortcomings in how 1798 is commemorated around Ireland. In places it’s not commemorated at all. But this may be a blessing because, even where it is, there are some historic howlers.

A monument in Castlebar, for example, shows a kneeling rebel being blessed by a priest (itself a slight rewriting of the Catholic Church’s attitude to the rebellion) while flanked by a harp, to represent Ireland, and the Fleur-de-lis, to represent France.

The problem there, as Cullivan explained, is that the Fleur-de-lis was the symbol of the French monarchy, the most recent incumbent of which had just had his head removed by the sort of French people who were now helping Ireland. Anti-monarchism was the whole point of the rebellion, really. The monument might as well have had Ireland represented by a crown.

Another memorial to earn satirical censure was the sign over Dublin’s Lord Edward Pub (a fine old establishment itself, by the way), opposite Christchurch, which Cullivan considered a crime against art.

I had passed this earlier too, as I have passed it a thousand times, without a glance. So I couldn’t claim to have noticed that it seemed to depict Fitzgerald as, for example, having “six fingers” on each hand, never mind its general traducement of a man who, in most representations, was borderline-handsome.

Naturally, I looked closer on the way home. And it struck me then that, if you were not a daily columnist who had issued a fatwa against the word, the picture was what you might well call an “icon”. That’s to say it’s a portrait of a revered figure, rendered in the naive style, although whether the sign painter’s naivete was deliberate is debatable.

Another dubious, if indirect, memorial of 1798, Cullivan thought, is the name of a prominent hotel in Galway: the one formally known as the Great Southern, on Eyre Square.

It’s called the Meyrick these days, because so once was the square, after the military bigwig Gen Meyrick, who erected a wall around it in 1801. And I suppose that, as well as having historic provenance, “Meyrick” does sound vaguely upmarket, in keeping with the hotel’s four-star status.

A potential drawback is that, as well as wall-building, the general distinguished himself locally by helping to put down the rebellion, with great brutality, especially in Co Clare, where he oversaw the usual mass executions.

That sort of thing would be less helpful from a hospitality-industry PR point of view, obviously, and I wondered later if the Meyrick broached the subject on its website. Alas I couldn’t find it there, anywhere. But what I did find, inevitably, was the Meyrick’s claim to be “Galway’s most iconic hotel”.