Bones of convention – Frank McNally on a dying Japanese custom

Ritual of Senkotsu requires the family to reassemble, disinter the body, and wash the bones 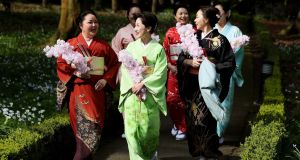 Members of the Odorikko dance group enjoy a walk on the grounds of Farmleigh House ahead of their show at the Japanese Hanami festival in Dublin’s Phoenix Park. Photograph: Brian Lawless/PA 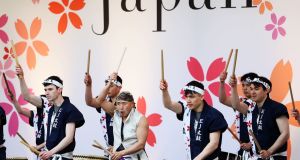 A Taiko drums performance at the Japanese Hanami festival in the grounds of Farmleigh House in Dublin’s Phoenix Park. Photograph: Brian Lawless/PA

In one way, the opening feature of this year’s Japanese Film Festival was a subject with which any Irish viewer would feel fully at home. Bone Born Bone, as the title translates into English, is set around a funeral, with various family tensions coming to the surface. There is drink involved, and sexual repression, and of course a tyrannical aunt who bosses everyone around.

So far, so familiar. But Bone Born Bone hinges on a ceremony that seems strange even to the Japanese, except on the remoter southern islands of Okinawa, where the film is set.  It’s known as Senkotsu, and is the funeral, part 2.  Held four years later, it requires the family to reassemble, disinter the body, and wash the bones.

This is not a ritual for the faint-hearted. In the film (and – I can well believe – in reality), some people have to fortify themselves for it with alcohol. As depicted here, however, the work becomes reverently methodical.  They don’t just wash the skeleton: they dismantle it, like natural historians, and then reinter the components, one by one, ending with the skull, in a permanent ossuary.

It may not sound like a subject for comedy.  But it is, somehow, although it’s also one of those films where you’re laughing one minute and blinking away tears the next.  Or maybe that was just me. There were several moments in Dublin’s Lighthouse Cinema on Wednesday night when I had to avoid eye contact with my neighbours, so I’m not sure how anyone else reacted.

As the film’s odd title hints, the theme of mortality is intertwined with that of maternity.  I hesitate to use the term “plot spoiler alert” in a funerary context.  But you can probably guess at the general direction of the film’s operatic, life-affirming, climax.

Feel-good ending or not, Senkotsu is understandably rare these days, even in Okinawa (although the latter-day Mayans of Mexico do something very similar).  In Japan as a whole, almost all funerals now involve cremation.  Still, you can imagine how much it might mean to older people reared in the tradition that the ceremony be performed for them too.  This must now be yet another source of tension around family funerals there.

I don’t know if Patrick Lafcadio Hearn ever wrote about the practice – it would have been in keeping with his general subject matter.  His many books include one called Japan: An Attempt at Interpretation, which included descriptions of local religious beliefs and their various purification rites. He also collected Japanese folk tales, especially ghost stories.  One of his best-known works was Kwaidan: Stories and Studies of Strange Things.

But if Hearn was preoccupied with the other world, he was very much a citizen of this one, in every sense.  Born of a Greek mother and Irish father on the Ionian island of Lefkada – hence his middle name – he grew up in Ireland, England, and France, variously fought over and abandoned by relatives who couldn’t agree whether he should be Protestant or Catholic, until he rejected Christianity altogether.

Emigrating to Cincinnati in his teens, he became a newspaper man, married and divorced a black American, and lived long enough in New Orleans to be the second-most written-about resident of that city after Louis Armstrong. Then he spent a period in the West Indies. Yet he still had time in a 54-year life to move to Japan, where he finally found a home, going native as Koizumi Yakumo, and dying there in the same summer (1904) James Joyce left Dublin.

Today, when the names of “Japan” and “Ireland” occur in the same sentence, Hearn is never far from the conversation.  Thus his life will be the subject of a lecture in UCD this coming Monday, given jointly by two leading Hearn-ologists: Prof Mary Gallagher and former diplomat Paul Murray, as part of a Japan-themed module for undergraduates.

But the Greco-Irish-British-American-Japanese writer also loomed large at last Sunday’s Experience Japan festival in Farmleigh: an event timed as always to coincide with the season of cherry blossoms.  Among other things, this year’s festival featured a dramatic mash-up of traditional Japanese drumming and Irish step-dancing. They got on surprisingly well.

And strange as the stories Hearn collected in Japan were, they too were being absorbed by the land of his fathers.  The festival featured the launch of a bilingual collection of them, translated by Pádraig MacCearáin and illustrated by Clare Okua McCay. The languages involved are Ireland’s first and second official ones. But via its title, at least, the collection (available now through Connradh na Gaeilge) gives Japanese the last word: “Sayonara”.