Sanctuary in Notre Dame and a brush with a second Quasimodo

I watched the sad TV pictures as if from the bookstore Shakespeare & Co, on the Seine’s left bank 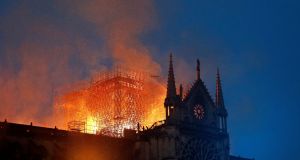 If there is any consolation in this week’s disaster, it’s that much of what was destroyed, including the spire, dated only from the reconstruction that started in 1841. Photograph: Yoan Valat/ EPA

As many of you will know, Victor Hugo’s novel The Hunchback of Notre Dame revolves around the ancient concept of sanctuary, by which the grounds of a church, and anyone within it, were safe from secular authority.

In the 1939 movie version, Charles Laughton’s Quasimodo defies the laws of physics by swinging down from the cathedral on a rope and rescuing Maureen O’Hara’s Esmerelda from the (conveniently adjacent) gallows, before swinging her back into the sacred building and declaring “Sanctuary! Sanctuary!” to the cheering crowds.

Even in Hollywood, however, the reprieve is temporary. It was unthinkable that the Hunchback could get the girl. Having saved her for someone else, the sad hero is left to finish the film wishing he were made of stone, like the gargoyles around him.

If there is any consolation in this week’s disaster, it’s that much of what was destroyed was controversial

Mind you, that’s a happy ending compared with the novel’s, in which Esmerelda is later hanged anyway and Quasimodo starves himself to death on her grave.

Oh well. Of the two ladies of Paris in his ambiguous title, Hugo was less concerned with saving the human one than the architectural, by then (1831) in a dire state following the revolutionary years. In this at least, his novel had a happy end: a renewal of public interest in the cathedral and a major restoration project starting in 1841.

Alas, we now know, that too was temporary. But if there is any consolation in this week’s disaster, it’s that much of what was destroyed, including the spire, dated only from that reconstruction, which like most such projects was controversial.

Its main architect, Eugene Viollet-le-Duc, landed the job at the remarkably young age of 31. Only a decade earlier, his building work had been limited to one of those quintessentially Parisian structures – a barricade – during the revolution that overthrew Charles X.

A favourite of the new regime, he went on to win many major restoration contracts, including the Île de la Cité’s other ecclesiastical wonder, the Sainte-Chapelle. As one of his mentors wisely warned: “A restoration may be more disastrous for a monument than the ravages of the century”. And in fairness, Viollet-le-Duc’s was no disaster. But it did have its critics.

It also had at least one concession to ego. I’m not sure if the statue of Doubting Thomas has survived the conflagration (some statues were removed before the latest restoration work). Either way, it is said to have borne a striking likeness to the architect. According to Paris historian Alistair Horne: “Viollet-le-Duc capped his contribution to the great cathedral with a statue of himself up among the angels lining the roof, the only one with its eyes directed to heaven.”

I watched the sad TV pictures on Monday as if from the bookstore Shakespeare & Co, on the nearby left bank of the Seine. Before the disaster, it was always one of the fringe benefits of visiting that lovely shop that you could admire the view of the cathedral just across the river.

Even for a jaded tourist, who had been there and done that in all the famous monuments, it was reassuring to see Notre Dame standing, apparently forever, and to know it was still striking awe into others who had never been there before.

It may have been the same Palm Sunday on which my future wife and I once visited it in the 1990s that we also chanced into the bookshop for the first time and were invited upstairs for tea by the late proprietor, George Whitman.

This was a common occurrence then. He used to host tea parties on Sunday afternoons for the various refugees who happened by, some of whom ended up staying, free of rent, while studying or writing. In that respect at least, the shop carried on the work of the medieval cathedral. In fact, among the signs Whitman had posted on the walls was one that read: “Be not inhospitable to strangers, lest they be angels in disguise.”

I paid his hospitality back many times over in book purchases, including books I never got around to reading afterwards. It’s amazing how, for the duration of a visit to such a place, but no longer, you could find yourself interested in, say, mid-20th century Italian poetry.

In any case, it is thanks only to the cathedral and bookshop that I know of the existence of a poem called Glendalough, which also revolves around the theme of sanctuary. It was written by a Sicilian, who was quite famous in his time. In fact, he won the 1959 Nobel prize. And yet I had somehow never heard of him before, until being amused by his name: Salvatore Quasimodo.

1 How long can Government afford to keep State pension age at 66?
2 Covid-19: Pressure over breakdown in tracing system intensifies as State enters Level 5
3 One hundred Irish retailers for all your online Christmas shopping
4 Gym owner plans to defy restrictions and open
5 Miriam Lord: All test and no trace makes Jack, and heaven knows who else, a very ill boy
Real news has value SUBSCRIBE