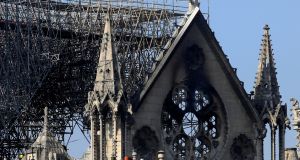 As for the general pandemic of I-word abuse, its effect on us allergy sufferers is grievous, even in the context of a story like the one from Paris, where the adjective would ordinarily have been useful. Above, a damaged section of Notre-Dame Cathedral after Monday’s fire. Photograph: Gonzalo Fuentes/Reuters

For those of us who suffer from allergic iconicitis – a rare medical condition caused by global overuse of the adjective “iconic” – this has been a very trying week.

It didn’t help that the fire in Notre Dame cathedral was an event unusually worthy of the word, unlike most contexts in which it is now used. The inability of many TV reporters to go more that two sentences at a time on Monday without resorting to it was still enough to bring the sensitive out in a rash.

Besides, even in recent days, its usage has not been confined to the disaster in Paris. The latest series of Game of Thrones also sent a huge release of iconics into the atmosphere, applied to everything from the programme’s theme music, to the black feather dress worn by a female protagonist, to the distinctive ways in which the characters kill each other.

Elsewhere in the past 48 hours, social media revealed the vast and dizzying range of subjects to which the adjective is also applied these days, in which it was business as usual.

Bizarrely, the word has of late become indispensable as a verbal expression of teenage hormones. This seems to be especially true in Asian countries. As Notre Dame burned, so did countless anglophone Japanese and Korean adolescents on Twitter and Instagram, declaring “iconic” the way their idols move their hips, or flick their hair, or just stand around looking moody.

Meanwhile back in the western world, public relations consultants were busy as always writing the I-adjective into press releases for a thousand different products or services to which they might once, before it died of shame, have applied the term “de luxe”.

They were the ones who started it. It was marketeers who took the formerly-prestigious “iconic” – meaning as it could “revered”, “famous”, “epochal”, “timeless”, or “style-defining”, while also crucially implying that you’d been to university – and turning it into a linguistic equivalent of the Zimbabwean dollar, circa 2008. Unlike the Zimbabwean dollar, alas, there is still no sign of it being withdrawn from circulation.

Long-time readers may consider me a bit of a crank on this issue. They may even be right. But I’m not alone. Even Fowler’s Dictionary of Modern English, which can be notoriously tolerant of popular foibles, expresses exasperation at the I-word’s mistreatment. Nor does it stop at the word’s mere ubiquity.

Among the dictionary’s particular complaints is the crime of people referring to “iconic images”, which is essentially saying the same thing twice. “An ‘iconic image’ is equivalent to a ‘symbolic symbol’, explains Fowler, “and no-one would, in all seriousness, write such a thing”. He adds: “It is not pedantic to insist on this kind of awareness, but respectful of the ways in which precise and graphic old meanings underlie more generalised modern usage.”

Hear, hear. Yet there was US Vice-President Mike Pence tweeting on Tuesday, in all seriousness, that Notre Dame was “an iconic symbol of faith”? And from the other, secular, end of the spectrum, came this: “Notre Dame cathedral, the iconic symbol of the beauty and history of Paris, was scarred by an intensive fire on Monday”? That was the New York Times, which should know better.

Just to show that I’m not a fanatic, by the way, I consider at least one modern usage of the I-word entirely acceptable. That is as the noun for describing those little pictures on phone and computer screens. There, at least the word retains a logical link with the original icons: the formulaic, religious pictures beloved of Orthodox churches, which were considered doors or gateways to the spiritual.

Those were aids to meditation, through which you could reach another world: an idea extended into the icon screens that separate orthodox congregations from the church sanctuary. The computer version is an elegant extension of this concept, even when it’s directing viewers to the Angry Birds game rather than to reflections on the Nativity.

As for the general pandemic of I-word abuse, its effect on us allergy sufferers is grievous, even in the context of a story like the one from Paris, where the adjective would ordinarily have been useful. The word has been petrified into cliché. So for us sufferers, it added an element of Chinese torture to the horror of watching Notre Dame burn. Every time I heard a reporter say it on Monday night, it was like being tapped on the head, always in the same place, with a mallet.