Jennifer O’Connell: The Government's speculation on Christmas is infantilising

Government instruction distracts us from asking difficult questions about Level 5 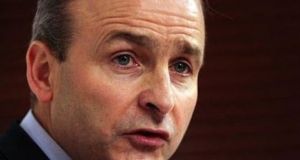 Taoiseach Micheál Martin: the Government and the National Public Health Emergency Team should be figuring out how to reverse the country out of the ill-conceived purgatory of Level 5 with minimal further damage. Photograph: Getty Images

The small child trailing her parents around the supermarket last Christmas Eve had evidently had enough. Her screams filled the air like infected viral droplets on a crowded plane. “I hate Santy coming,” she howled over and over, with the ferocity of someone who had suffered weeks of threats and bribes and was at the end of her tether. “I hate Santy coming.”

For a moment last week, I empathised with that heroically incandescent toddler. Chief medical officer Dr Tony Holohan took it upon himself, again, to chide the public that the shape of Christmas will depend on whether we “manage to keep up the very high standards of behaviour for the full six weeks”. This came after Taoiseach Micheál Martin warned that having “a meaningful Christmas” depended on getting the numbers down, and before Tánaiste Leo Varadkar told Irish people abroad not to fly home for Christmas. Holohan repeated his warning: “Things are going to be very different this Christmas.”

We get it. Not since Archbishop John Charles McQuaid have we received so much instruction about how we should approach what is for most of us a private, family moment. The blizzard of speculation over Christmas is infuriating and infantilising. It’s also a convenient distraction from what the Government and the National Public Health Emergency Team (Nphet) should be doing, which is figuring out how to reverse the country out of the ill-conceived purgatory of Level 5 with minimal further damage.

Not since Archbishop John Charles McQuaid have we received so much instruction about how we should approach what is for most of us a private, family moment

Instead of dangling Christmas as a threat or reward, it might be more instructive to ask people whether they’re willing to pay for a substantial easing of restrictions now with another complete lockdown in January or February. I suspect the Government might be relieved by the answer. Many of us would be quite happy to stick to a quiet affair at home if it meant a better chance of making it as far as vaccination without another lockdown.

Still, as long as the public is kept preoccupied with whether they’ll get to do the 12 pubs or see granddad, it means they’re not asking difficult questions. They’re not asking, for example, how many positive cases will slip through the net of the new travel plan. Once again, Ireland is going to have both the strictest set of rules for incoming travellers and the most lacklustre enforcement of them – a problem we’re apparently hoping to solve by pleading with people not to avail of them. Travellers will be allowed to fly in from red-zone countries and skip the full 14-day self-isolation provided they can produce a negative PCR test a minimum of five days after arrival – giving them ample time to seed a new cluster, should they choose to ignore the Government’s polite requests that they stay in their rooms.

If the public is kept preoccupied with Christmas, they’re not testing the Government’s self-congratulatory claims that “Level 5 worked” – when in fact data suggests it was Level 3 that worked. The confirmed cases peaked on October 18th, three days before Level 5 began, and the testing positivity rate began to level off on October 19th. Yes, Level 5 continued to drive the caseload down. But at what cost? Up to 150,000 jobs were instantly wiped out. Retailers have missed out on vital weeks during a period when, as one put it to me, they would have expected to do 25-30 per cent of their turnover and make 70 per cent of their profits for the year.

The country needs to open up to give those businesses a chance. But how? We could have kept things simmering along at Level 3; instead, we now have to figure out how to release the pressure valve of all that pent-up frustration, loneliness and delayed consumer gratification without catapulting straight back into a January lockdown.

Going from Level 5 back to Level 2 or 3 at this time of year will be like turning on a firehose to water a plant.

It shouldn’t be backbench politicians or lobby groups who determine what can open, but coronavirus itself. Since it thrives in crowded environments where people are inclined to get close and speak loudly, the risk of opening pubs and nightclubs is too great. Gyms are problematic because of the high levels of forced exhalation. So are house parties, where people tend to congregate in steamy kitchens.

It shouldn’t be backbench politicians or lobby groups who determine what can open, but coronavirus itself

But retail outlets, hair salons and hotels should be allowed to reopen. Up until the week we went into Level 5, there were a total of 23 outbreaks associated with retail outlets across the country, 10 with hotels or B&Bs, and just three connected to personal grooming services. By contrast, there were 4,498 in private homes, 226 in workplaces and 53 related to travel. Cafes and restaurants, which had a total of 33 outbreaks, should be given a chance to reopen, with restrictions such as early closing times.

When we look back on this period from a vantage point of five or 10 years’ time, so much of what we’ll say is already depressingly clear. We’ll say that the Government panicked in October and shut down the wrong things. We’ll say that we paid for the easing of those overly stringent restrictions with a third punitive lockdown in January or February.

We’ll say that we learned nothing from the successful approach of countries in Asia, many of which relied heavily on rapid testing and forensic contact tracing. We’ll say that paralysis over the Border prevented us tackling travel. We’ll say that Nphet was too powerful and not nearly representative enough.

We’ll say that the best thing about the vaccine arriving in 2021 was the lives it saved. And that the second best thing was that we remembered how dysfunctional it is to have this level of State interference in our private lives.