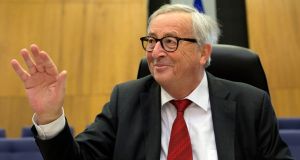 European Commission president Jean-Claude Juncker has shown himself to be a good friend of Ireland throughout the complex Brexit saga. Photograph: Virginia Mayo/AP

There has been a certain amount of glee in this country at the gullibility of the British electorate in voting for Brexit on the basis of false promises and clearly spurious claims about the way the European Union works.

In a few months, the Irish electorate will face a test of its own maturity when we vote in what looks like being the most important European elections in the history of the EU. Going on past performance, voters here are capable of behaving every bit as foolishly as their British counterparts.

Over the years, Ireland has sent some talented politicians to Europe but it has also shown a weakness for electing mavericks and rabble rousers who have had little positive to contribute to shaping the EU.

The elections in May are shaping up to be a fundamental test for the future direction of Europe. With populist parties committed to undermining the EU as we know it on the rise all over the continent, voters here will face a clear choice about the kind of Europe they want.

This is particularly so as voters will be presented with the names of the candidates to replace Jean-Claude Juncker as the next president of the European Commission. It is worth remembering that in the last European elections five years ago, just four of the 11 MEPs elected from Ireland were committed to supporting Juncker.

In 2014, the European People’s Party, to which Fine Gael is affiliated, won four seats while another four, the three Sinn Féin MEPs plus Luke Ming Flanagan, joined a hard left group dominated by former communists. Of the remaining three seats, two were won by Independents – Marian Harkin and Nessa Childers – who belong to the mainstream Liberal and Social Democrat groups respectively, while the other is held by Brian Crowley of Fianna Fáil who belongs to a group of conservative nationalists.

Crowley refused to sign up with the Liberal group to which his party is affiliated but sadly, due to illness, he has not been able to attend any sessions of the parliament over the past five years.

This time around, Ireland will have two extra seats, bringing its total up to 13, due to the expected departure of the United Kingdom. If the continuing chaos over Brexit is not resolved and the UK does not leave by the time the new parliament meets in July, the two extra Irish seats may have to be put on hold.

One way or another, the elections will represent a challenge to the Irish political system to seriously debate the future of Europe so that those who are elected to Strasbourg fully reflect the views of the electorate about where the union should go.

That places a responsibility on political parties to come up with serious candidates who are not only capable of winning seats but can have an impact in Europe. It will also challenge the electorate to take the contest seriously and not engage in frivolous voting on the basis that it doesn’t matter who goes to Europe.

The priority given by the EU to the Irish Border issue is a clear demonstration that full engagement with the European political process does matter. One of the key reasons Ireland has received such strong backing from European leaders is that former taoiseach Enda Kenny had established a network of influence through his commitment to the European People’s Party (EPP).

Foreign diplomats based in Dublin still express amazement at the way Kenny was able to get the Border to the top of the European agenda. His influence was the product of a decade of diligently attending EPP leaders’ meetings while he was in the political wilderness at home. That slog bore fruit when he achieved power.

This time, Fine Gael should be able to retain four seats for the EPP and even aim for five but the real opportunity for gain lies with Fianna Fáil. After a dismal performance in 2014, the party has a real chance of winning at least one seat in each of the three constituencies for the Liberal group. The Labour Party faces a bigger battle to regain a seat for the Social Democratic grouping. In the past, the party was represented by experienced and able Irish politicians such as Barry Desmond and Proinsias De Rossa but, given its current standing in the polls, it will be a real battle to recover the seat.

Sinn Féin seems assured of holding its three seats so the real fight will be to see whether the seats currently held by Independents can be won by one of the established parties or possibly by the Greens who have a good record in European elections. The Greens are a growing force across Europe, particularly in Germany, and the elections represent an opportunity for the party.

One way or another, the new parliament will witness a do-or-die struggle between parties committed to making the EU stronger and those from the extremes of right and left who want to put the process into reverse. Every Irish seat will count in that battle.

1 Susie Dent: ‘Jimmy Carr is incredibly rude to me. I took it as a compliment’
2 Trump selects Amy Coney Barrett for Supreme Court
3 Blackrock and Mulhuddart: How Covid-19 affected two Dublin suburbs
4 Man with electric scooter who died in Meath was due to get married in the coming weeks
5 Political focus shifts as Government desperately tries to avoid new lockdown
Real news has value SUBSCRIBE